Pressed for dollars, a growing number of public schools are doing what many educators once considered unimaginable: establishing a four-day week.

At least 292 school districts nationwide have a four-day week, according to a Washington Post survey, more than double the 120 estimated two years ago.

That’s still a small fraction of the nation’s 15,000 school districts, but it’s one signal that this is shaping up to be a “cliff year” in American education as the evaporation of federal stimulus funds and other fiscal troubles force many schools to make dramatic cuts.

In this community just north of the Twin Cities, they already cut the drama club. And cheerleading, ski club and marching band. So many teachers have been laid off that some classrooms have 40 students and one high school guidance counselor juggles 550 students.

When school officials couldn’t figure out what else to squeeze, they lopped off a day and went to a four-day week.

For the Hyduke family, that means when Ruby, 8, and Nora, 6, hustle out the front door on Mondays, their parents go to work and the girls head to day care.

Ruby and Nora play board games like Sorry! and Trouble. Sometimes, they do crafts. Mostly, they look forward to Tuesday, when the school week begins. “I like school better,” Ruby said in a soft voice — because “you get to learn more there.”

A four-day week has been around since the 1930s and experienced revived interest during the oil crisis of the 1970s.

But they had been used largely by a handful of rural districts in Western states, including New Mexico, where buses can burn plenty of gas traveling mountainous roads.

Growing economic pressures have forced districts small and large across the country to consider the practice of a four-day week.

“Five years ago, I rarely got a call about this. Now I’m getting a call a day,” said Michael Griffith, senior policy analyst at the Education Commission of the States,which advises states on policy and practices. “And for the first time, the larger, more urban districts are talking about a four-day week.”

Places like Pasco County, Fla., 30 miles north of Tampa, which is considering whether to shift its 67,000 students to a four-day week to reduce a $26 million shortfall projected for next year.

And Marion County, Fla., about 75 miles northwest of Tampa, which plans to put its 41,000 students on a four-day school week next year. “There’s nothing left to cut,” said Kevin Christian, a spokesman for the system, where the budget has shrunk from $600 million to $478 million over the past three years.

The Washington region, with its strong local economy, has largely been spared severe budget pressures felt elsewhere. No local school districts have seriously considered cutting the week, and some face built-in obstacles. In Maryland, for example, state law would have to be changed.

Because most states require a minimum of instructional hours, districts that drop a day lengthen the remaining four days so students don’t lose “seat time.” Research measuring the impact of a four-day school week on student achievement is scant. Educators in North Branch and elsewhere say there is no evidence that it has hurt learning.

But a four-day week can be hard on families and students.

North Branch offers day care in its elementary school on Mondays, at a cost to parents. But only about 50 of the district’s 3,414 students, including the Hyduke girls, participate.

Savings are gained in electricity, food and transportation as well as the wages for cafeteria workers, bus drivers and other nonsalaried employees. But Griffith said the savings are usually modest, totaling around just 2.5 percent of a typical budget. 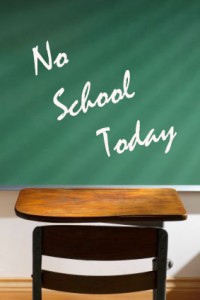 Henton said the change has yielded unexpected benefits, such as a lower absentee rate among students and teachers, who tend to schedule appointments and other errands on Mondays.

Supporters of the schedule tend to be households where one parent is home on Mondays.

“I like the three-day weekends,” said Joyce Torgerson, a part-time nurse with two children in elementary school. “We like to go camping and fishing and on trips like that. I feel like this gives us freedom to do things as a family.”

Most teachers interviewed said they enjoyed the schedule, one detailing how he sleeps late on Mondays and corrects papers in his pajamas. But several harbored doubts about its long-term impact. “Selfishly, I like a four-day week,” said Joan Carlson, a 20-year veteran English teacher in the middle school. “Sunday nights, my husband and I like to go out to restaurants and do things. Do I think it’s good for education? No.”

In the shadow of the grain silos that loom over the center of North Branch, some teenagers were shooting baskets by the freight tracks one recent afternoon. Kyle Fairbanks, 16, said he spends Mondays home alone, sleeping until noon and playing “Gears of War 2” and other video games until his parents come home from work in the evening.

“There’s nothing really to do,” he said, drawing his sweatshirt up against the wind. “And then we have really long school days.”

Under a four-day week schedule, class periods are stretched from 45 minutes to 58 minutes.

Teachers have to recalibrate their lessons and employ various tricks to try to keep students focused as the day wears on.

At the elementary school, Principal Jason Hartmann replaced some desk chairs with stability balls because he thinks they help keep the children alert. Many teachers try to schedule challenging material early in the day or at the start of a period. There are frequent breaks for stretches and snacks in the late afternoon.

If children play sports or participate in a club after school — for a fee — by the time they get home, there’s not much time for anything beyond dinner, bath and bed. So many teachers avoid giving homework on weeknights.

Dan Husnik has two daughters in elementary school. They live at the outer edge of the district, where the bus picks them up at 6:45 a.m. and returns them nearly 10 hours later at 4:30 p.m. Claire, 7, frequently falls asleep on the ride home. “She is dragging when she comes off the bus,” he said.

The move to a four-day week comes as the talk in national education circles is focused on more learning time — adding weekend study sessions, shortening summer vacation — to better compete with countries with year-round schools.

“Where you see schools going to a four-day week, where you see them eliminating after-school or summer school programs, all of those things hurt children,” Education Secretary Arne Duncan recently said.

The federal share of education for kindergarten to grade 12 is about 10 percent; the rest comes from state and local government.

North Branch is a city of about 10,000 people 50 minutes north of St. Paul and Minneapolis. The community was booming a decade ago, attracting families in search of good schools and affordable homes within commuting distance of the Twin Cities.

But the recession knocked North Branch onto its heels. Its downtown is forlorn, with vacant storefronts tucked between the taxidermist, coffee shop, barbershop and a thrift store. The dearth of commercial properties means homeowners shoulder a great deal of the tax burden. Last year, the county had one of the highest unemployment and home-foreclosure rates in the state. The drop in property values and taxes has had a profound effect on money for the schools.

Seven times in six years, the North Branch school board has asked voters to approve a local levy for schools. It’s failed each time, last year by a 2 to 1 margin.

The school board tried again Nov. 8, seeking a levy to raise $1.5 million annually for the next three years. The district is predicting a shortfall of $2.5 million next year, so the levy would only soften future cuts, not eliminate them. The average homeowner would pay $122 a year. Chances for passage appear slim.

Since the school district started a four-day week, North Branch has been hemorrhaging students.

This fall, it lost 198 students, and along with each went about $5,800 in state subsidies. Considering the lost income, some wonder if a four-day week is worthwhile.

Mindy Lattimore teaches English at North Branch High School, from which she graduated. During a break on a recent school day, Lattimore pulled out her 1996 black and red varsity letter jacket. It’s an artifact now, covered with felt badges from activities no longer offered: French club, drama club, Future Leaders of America, marching band, Students Against Drunk Driving, Odyssey of the Mind.

“This is a North Branch problem,” said Lattimore, whose eyes well up when she thinks about her 4-year-old daughter, poised to start kindergarten next year. “But it’s also a state problem and a national problem. For the first time, our children are going to get less than we had. How is that okay?”

If North Branch voters reject a levy, more cuts and layoffs are guaranteed for schools. “It’s either that,” said Chas Bettendorf, a social studies teacher and union leader, “or a three-day week.”