Blink! Think! Make Your Choice Use Your Voice

When you place your children in the care of other adults – day care providers, teachers, coaches, religious clerics, camp counselors – you trust they will be safe but you know you can’t be totally sure. When a supposedly trusted authority figure tells a child to do something wrong it is a confusing and potentially dangerous experience. 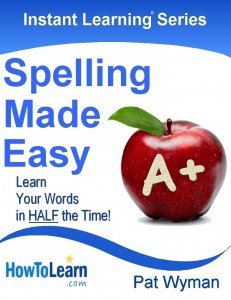 You prepare your children to not get into cars with strangers or walk off with a stranger at the mall. How do you prepare them for the rare but complex situation when a legitimate authority figure tells them to do something they shouldn’t?

Many of us don’t. Let’s see how we might.

We already have a great example of how to do this from another safety activity. It is Stop, Drop and Roll. Most of were taught this at a very young age. If our clothes catch on fire, what do we do?

This simple memorable saying has saved disfigurements and even deaths.

Relatively few people have ever needed to use this. Yet they still remember it even decades later. Why?

A rhythmic rhyming phrase is memorable. When it is combined with simple practice our brains form a pattern for behavior that can activate when the right circumstances trigger it.

So let’s create a memorable saying we can teach and practice with our children about orders from authorities. The one I came up with is:

The full expression is “Blink, Think, Make Your Choice, Use Your Voice”. What is it telling your students or children to remember?

It is teaching them how to say “no” when saying “yes” would be harmful. This is known as “Intelligent Disobedience.” It is a critical skill both for safety and good citizenship. It is taught to guide dogs and service dogs. Surely we can teach it to children.

When individuals get an order that surprises them and seems wrong there is an initial startle response. This shuts off their reasoning and the social programming to obey authority can take over, putting them at risk of obeying when they should not.

This is what we want our children to remember when someone in authority (or, for that matter, a peer) tells them to do something that will be harmful to themselves or others:

BLINK: Register the shock. Pause. Blink a few times in disbelief. Take a few seconds to recover. Resist the social pressure to obey the authority figure.

THINK: What is at stake? Does the order make sense? Does it go against what you have been taught is right? Could obeying cause harm to you or another?

CHOICE: You always have a choice: obey, disobey, check with someone else, or offer a different option. Which choice seems right?

VOICE: Express your decision early and clearly. Don’t send a mixed message. If you decide “no”, say it so your meaning can’t be misunderstood. “No!” means “No!”

Explain these steps at an age appropriate level. Then model the steps. Here’s one example:

Have the child be the coach of your sports team. You’re the student receiving the order. The coach tells you to intentionally injure another player to get that player out of the game. Here’s what you do:

BLINK! Open your eyes wide and close them again quickly several times. Do this for a few seconds. You are taking control of the startle response.

THINK! Say what you’re thinking so the children can “hear” your thought process. “I’m thinking this isn’t right. We’re taught to play fair. We don’t hurt others on purpose.”

MAKE A CHOICE: Say the choice you make so the children can “hear” what you have concluded. “I’ve decided this is wrong and I am not going to obey.”

USE YOUR VOICE: Stand up straight, look the coach in the eye and say clearly “No! I won’t do that! I’m going to play fair.”

It is not difficult to devise simple Intelligent Disobedience role plays. Create age-appropriate scenarios involving different authority figures telling your children or students to do something wrong. 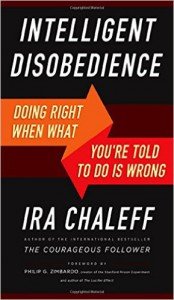 Next you want the children to practice doing this. Use the same scenario for the first few times until it is being done well. Then improvise another scenario, working up in difficulty and sensitivity.

Actual events that should have been met with Intelligent Disobedience have included children being told to help restrain other students with duct tape by teachers who have lost control of class behavior, students being given answers to standardized tests by teachers fearful of the consequences of poor test results and, most disturbingly, inappropriate sexual touching by camp counselors, clerics or older relatives.

Include in the role plays some well meaning orders that can still result in harm. For example, a crossing guard who doesn’t see a car coming around the corner and says it is okay to cross the street. You and other parents will have additional examples for role plays.

Why are rehearsals important? The shock of the moment shuts down cognitive functioning. Lacking prior rehearsal, there is no muscle memory to see the child through the dangerous event.

Imagine If a child’s clothes catch fire and she panics and starts to run. Without prior practice “Stop, drop and roll!” may not kick in as the correct response. The same is true with Intelligent Disobedience. Without some practice, the fight, flight or freeze syndrome may prevail instead.

Children can play both roles of the authority and of the child to keep it interesting and to develop further awareness of the fallibility of authority figures.

After they demonstrate competence in making the choice to say “no”, it is useful to do some role plays in which an authority gives an unusual order that should be obeyed. For example, if there is a shooter in the school and the teacher tells everyone to jump out of a first floor window.

It’s the same process: Blink. Think. Choice. Voice. In this case the choice is to obey and the voice is a silent or quiet “yes”. With older children you can introduce more complexity in which the choice is neither “yes” or “no” but offering a creative and safer alternative. I give examples in my book such as a role play for teenagers who have forgotten their key and are questioned by a police officer when they try climbing through a window to get into the house.

But school lesson plans are already heavily loaded. More directly and more practically, you can create your own exercises for use in extra-curricular activities, religious training, etc. If you worry about sending your children on school or church travel programs or to summer camp, you can practice these simple role plays at home.

Blink and Think, make your Choice, use your Voice.

Not only will you keep your children safe. You will prepare them for the ethical decisions they will face as older teenagers, college students, working adults and citizens in an increasingly authority-oriented society.

For that matter, you yourself may need to practice this to use in your own life.

You are beginning to remember it already. 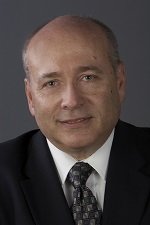 Ira Chaleff is the author of Intelligent Disobedience: Doing Right When What You’re Told To Do Is Wrong. He is the founder of the International Leadership Association’s Followership Learning Community and a member of the ILA board of directors. He is a frequent speaker and workshop presenter on Courageous Followership and transforming hierarchical relationships into powerful partnerships. Chaleff is founder and president of Executive Coaching & Consulting Associates, which provides coaching, consulting, and facilitation to companies, associations, and agencies. He is adjunct faculty at Georgetown University, where Courageous Followership is part of the core curriculum in its professional management training for staff. Chaleff lives in the Blue Ridge Mountains outside of Washington, D.C.