For many elementary and middle school students, an algebra equation such as 4x + 2 = 3x + 9 is indecipherable. To demystify this abstract notation, Hands-On Equations® enables students to represent the equation physically in a manner that has meaning to them. 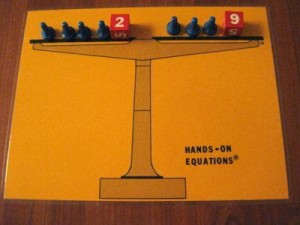 On the left, the four x’s are represented by four blue pawns and the constant by a red 2-cube. The plus sign is implicit in the physical act of placement on the scale. The right side of the equation is situated in a similar manner. The representation of the written equation in this physical form demystifies the abstraction. Students now can easily understand the meaning of the problem.

The number on the red cube facing up indicates the weight, or value, assigned to that cube. The pawn has a unique weight, or value, and is the same each time it appears in a given equation. The algebraic task is to find out the value of the pawn, given that both sides of the scale must have the same weight for the scale to be in balance.

Solving Algebra by Trial and Error

To ensure that students understand the meaning of the problem, we ask them, first, to try a value for the pawn to see whether that value will make both sides balance. For example, we might say, “Let’s consider the possibility that the pawn is worth 5. If we do so and mentally substitute 5 for each pawn on the left side, we count 5, 10, 15, 20, plus the 2-cube and get 22. On the right side, we count 5, 10, 15, plus the 9-cube and get 24. Because 22 and 24 are not the same, we see that the pawn cannot be worth 5 in this equation.”

A recent letter from a third-grade teacher confirmed the value of this strategy. In her work with “low-achieving” students, she said that she found her students’ desire to succeed with Hands-On Equations, which the students considered to be advanced mathematics, motivated them to master basic arithmetic facts.

Once students have a clear understanding of the problem displayed on the balance and have worked through the trial-and-error exercise, they are ready to solve the equation in a more direct manner. The key concept is the “legal move,” namely, removing the same value from each side of the scale to maintain the balance. In this example, students remove three blue pawns from each side of the scale and so arrive at a simplified representation, as shown below. 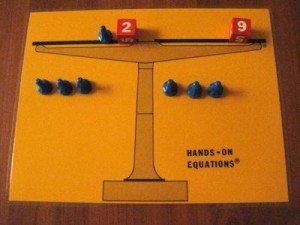 The student has removed three pawns from each side.

This short exposition shows the general approach that is used in Hands-On Equations. Students represent an abstract written equation in a physical manner and perform actions—legal moves—to simplify the physical setup and solve for x. They then reset the original problem with their game pieces in order to conduct the check..

Research conducted with more than 2,500 students in grades three through nine has shown that students can achieve high levels of success with algebraic linear equations using the illustrated approach. For example, in one study conducted with 111 fourth-graders, which included inner city students, 79 percent were able to solve the equation 4x + 3 = 3x + 8 on a retention test given three weeks after the end of instruction. The students did not use the game pieces on this retention test. Rather, they used a pictorial notation that they also learned within the program.

Today’s students no longer need to be intimidated by algebra. We are able to use the power of visual and kinesthetic learning to provide all students with a sound introduction to algebra.

Dr. Henry Borenson is the inventor of Hands-On Equations, a visual and kinesthetic approach to making algebra child’s play. FREE interactive webinars about Hands On-Equations are offered every two weeks. His program is used successfully by over a million algebra students.