How to Improve Reading for Children, Ages 6-18

The two most common pieces of advice about making children excel at reading are, “Have your child read more” and “Inspire a love of reading in your child.” It’s hard to decide which of those is more useless.

“Inspire a love of reading” assumes that you have to like something to be good at it. That’s nonsense. You can be in great shape but hate working out. You can be great at calculus without enjoying math homework. You can eat healthy food but prefer the taste of chips, soda, and lard.

Sure, many students who are good at reading like it, but often they got good at it before they liked it. When a child excels at something, he or she tends to like it more. The excellence is the cause, not the effect.

The first core reading skill is vocabulary. If you don’t know what a word means, you can’t make much sense of a sentence containing that word.

Reading a lot can help you build your vocabulary, but many kids just skip over words they don’t know. To really build vocabulary, you need to take a direct approach. Vocabulary Workshop is great for beginner words, and Wordly Wise is great for even easier words. To get more advanced, you can use a program like Vocabulary Synapse (written by yours truly), or just use SAT vocabulary lists or flashcards. With a direct approach, your child will accomplish more in a few months than in several years of general reading.

The second skill is grammar. Most kids (and adults) do a lot of guesswork when they read. They take the individual meanings of the words in the sentence, and then guess the most likely meaning of the entire sentence based on those words. Obviously, that method doesn’t work for anything complex or abstract.

The only way to correctly analyze complex material is to use the grammar of the sentence. World class readers do this subconsciously, but first they learn to do it consciously.

The best way to build an understanding of grammar is to study Latin. The second best way is to study English grammar directly. Do not count on a school to accomplish this. I have worked with students from dozens of top private and public schools, and have yet to see a school that adequately teaches grammar. The only exception are students who have taken several years of Latin.

Your child will have to learn grammar without much help from the school. Workbooks, such as English Workshop, are excellent tools. Make sure to include sentence diagramming as part of the training.

The final piece is concentration. If you lose focus easily, you can’t read well. Despite what many drug companies would have us believe, concentration skills can be improved without drugs. To do that, you first have to reduce or remove the very things that reduce concentration – TV, video games, etc. In fact, that, by itself, often is enough to sufficiently build concentration.

For that matter, removing TV and video games (including cell phone games!) is also the easiest way to get a child to read more. All people like entertainment, and if books are the only option, kids will read more. 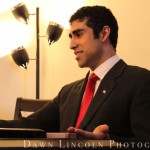 The author of The Equation For Excellence and the founder of AVE, Arvin Vohra is considered one of the most important educators in America. His educational programs have transformed the lives of countless students, and he has inspired audiences nationwide through his speeches and community outreach programs. Arvin’s passion for educational innovation began while he was studying at the Landon School in Bethesda, MD. Frustrated by the limitations he perceived in standard education, he began to test the limits of a different type of approach. He learned algebra in a few weeks to advance a level in math, and even attended college courses as early as eighth grade. In high school, he received a score of 5 on 10 AP exams to become an AP National Scholar. For 6 of those exams, he did not take the corresponding AP class, and instead relied on intensive outside study. He was also a National Merit Finalist, with the highest SAT and PSAT scores in his graduating class. On the SAT, he received a score of 790 on both the math and verbal sections.

He also received a perfect score of 800 on both the Math IIc and Chemistry SAT II tests. For his efforts he was awarded the Rensselaer Medal for Math and Science in his Junior year. During this time, Arvin worked actively as a tutor for younger students, most notably at the North Chevy Chase Elementary School. Arvin attended Brown University, where his passion for educational innovation continued to grow. He worked as a tutor and teacher as part of the Wheeler School’s Aerie Program. At Wheeler, he designed accelerated and nontraditional curricula for students ranging from second to eighth grade. Later, he worked as a consultant for the Hamilton Institute for Learning Differences. After graduating from Brown University with a B.Sc. in mathematics and a B.A. in economics, Arvin also developed his own system of speed reading, and used it to get perfect scores on both the GRE and GMAT. He finished the GMAT an hour and a half early, and the GRE an hour and forty five minutes early. He also passed two actuarial exams in a single testing period while working as an actuary at GEICO. Through the years, his initial frustration with standard education had developed into a powerful educational philosophy. This philosophy, combined with creative problem solving applied to education, formed the foundation for AVE.