How to Live in the Awakened State

Common to many religions there exists a tenet that speaks of mankind being asleep or in some sort of dream. It was this point that I was referring to in Prophet or Madman when I said that all of creation is an illusion.

What I meant by that was, creation as viewed through the filter of a human mind is not a true representation of what is but rather, a reflection of what we believe is. Over the years I have heard a saying more than once that hits on this point.

“Life is that which is happening while we are waiting for life to begin.”

In the Gospel of Thomas, when asked about the end times or things to come, Jesus responded by asking a question.

” Jesus said, “Have you found the beginning, then, that you are looking for the end? You see, the end will be where the beginning is.

Congratulations to the one who stands at the beginning: that one will know the end and will not taste death.”

Although many people in this world might have trouble accepting that the key to Life i.e. (being consciously cognizant of Unconditional Love/GOD) is linked to quantum physics, I believe I have come into this world to share that understanding with you.

For those who wish to experience Life on a continuous basis, I would like to add that it might prove a bit challenging to maintain. The primary reason for the difficulty is related to what you hold as your belief/belief system. Both in and beyond this dimension you will find that your thoughts and beliefs must be honored and allowed to play out and become part of that which you experience.

When Jesus spoke of the end being where the beginning is he was referring to the quantum view. Einstein once said something that showed he at least had a beginning understanding of the difference between the illusionary state mankind deems the real world and what exists beyond the false reality.

“The past the present and the future are nothing but an optical delusion of consciousness, albeit a persistent one.” Albert Einstein

Since being gifted with an overview of Creation that encompassed both the linear and nonlinear I have struggled with how to deliver on what God asked me to share with the world. The one thing that I can say with complete certainty is to shift from one state of being to another (asleep to awake) requires a great deal of dedication.

Although there have been many masters who have shared their unique view and approaches as to how one becomes transformed, to me Jesus laid out a formula that will always deliver.

The way in which Jesus said anyone can move from the Death experience to that of Life i.e. (consciously cognizant of God in the present moment.) was both simple and difficult both.

That formula was, judge no one and nothing. A simple concept and yet many might find doing this becomes the most challenging thing they have ever attempted to master.

Once again, I believe Einstein offered some insight as to the fact that we all have a choice as to how we experience ourselves.

I have often thought, wouldn’t it nice if there were a magical way in which we all could just move from our limited views based on the human perspective to our enlightened state? What I have discovered however was, there appears to be a process or a purification each of us goes through before we Truly Live.

The process is not only unique but is directly related to what we deem most important to us. Your freewill is an essential ingredient that must be factored into the unfoldment of your consciousness. With that thought in mind, combined with a little understanding that linear time is as Einstein said, optical delusion of consciousness, I would offer to you, the process to open spiritually is different then what which the world sees/lives.

Because that which is experienced through the spiritual awakened state is not limited to linear time, all beliefs that are rooted in and limited to this dimension must be released/transformed.

The question then arises, how does one move from seeing through the filter of the human mind to enlightenment? I would say that as with any task you must start with the end in mind. In other words, the first step is to get as clear as you can what it would be like to see without an attachment to physical form.

The second step would be to imagine that the perfected you as spirit already exists.

“The true sign of intelligence is not knowledge but imagination.”   Albert Einstein

Now here is the hardest part.

The third step to moving into the awakened state is trust.

Being that the universe must honor your every thought, the moment you cast doubt onto this moment or a future moment you alter or cancel the energies that would bring the event you first held the vision of.

Lastly, if you find that this process did not produce the desired result, repeat it over and over until you master your attachment to the limited human view. 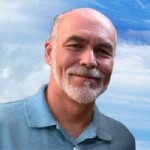 Bruce Adams is neither a theologian, a Bible scholar, a pastor, nor a teacher.  In fact, he is now an ice-cream man.  He was a successful businessman for some 25 years before he had the surprise of his life.  On a Saturday morning in 1996, when Bruce was poised to launch a potentially huge moneymaking machine, he took his 9-year-old son, Michael, ice-skating.  “There I was, gliding along, listening to the music…when all of a sudden, something happened.  The music, as well as the sound of the people, seemed to fall silent, just as if I had become temporarily deaf.  The next thing I heard was a voice.  This voice was unlike anything I had ever heard in the past.  It seemed to be not limited to my mind, but dimensional.  By this, I mean that it was both internal and audible at the same time.  I did not know how to take what was happening to me, especially when I saw that I was being given specific instructions to change the direction of my life.  I was being told to forego this million dollar business project  because there was something else I had to do.”

Thereafter, Bruce began a regimen of daily meditation.  His perception of life was drastically changed, and was replaced with something far different.  “Life, it seemed, was taking on new meaning.  Faith that there was something more was replaced with direct experience.”  Then one night ” I was sleeping and unaware of anything that was going on in my dream state, when I experienced something that made the voice I heard earlier seem trivial in comparison.  The best I can describe it is to say that I felt wide-awake, yet I knew that my body was resting.  I was both in the body and outside it.  I could think, but there was no need to.  I saw myself, for lack of a better word, as a formless consciousness.  Where was I?  There was nothing familiar about this place, because it had no form, and at the same time there was the sensation of comfort.  It was like the feeling of comfort you have in the safety of your own home….In that moment, I became aware of the whole of Creation as one presence.  Upon coming back into my thinking mind, I recall being told to write about what I had experienced.  I jumped out of bed and got my pad and pen”.   The book Prophet or Madman was the amazing result.