ADHD and Autism: Is There A Link?

Author Stephen Guffanti MD responds to the question about whether there is a link between ADHD and autism.

Dr. Stephen Guffanti author of Does Your Child Really have ADHD was giving a seminar one day about kinesthetic learners and a woman asked him whether there was a link between ADHD and autism.

Here is an excerpt from his book.

Let’s take a more in depth look at what this link between ADHD and autism might be.

In the case of the visual learner, because the tests evaluate visual learning, the auditory style would need to be very unused. This could lead some to create a link between ADHD and autism.

The book Late Talking Children by Thomas Sowell describes children who don’t talk until about the age of four. They all seem to be developing high visual traits and are clearly low auditory. They are most often misdiagnosed as autistic until they start talking when they may actually be a kinesthetic learner whom people imagine have a link between ADHD and autism.

Look at the criteria for autism that follows and think of a child who is 90% visual and 5% auditory and 5% kinesthetic. What kind of social skills would such a non-talker, non-toucher have?

Would he learn to talk? Why would he even bother to communicate? Given his limited kinesthetic abilities, when he did move, would it simply be repetitive?

Interestingly, the successful treatments succeed by linking a visual picture— like McDonald’s golden arches—with a word, like McDonald’s. Thus the child begins to understand that words have meaning.

In essence, by starting with the child’s learning strengths, treatment can be developed to strengthen his weaknesses.

The criteria for autism have changed since the days of the movie Rainman.

Most of these children are treatable through different types of social training or programs like applied behavior analysis.

In essence, Autistic Spectrum Disorder is a group of genetic defects that retard normal development of social interaction. Many genes are involved, and, depending on how smart the child is, the child can learn normal social interaction through direct instruction.

Thus the adult outcome is related to the child’s IQ and early intervention at the time when the child is developing his or her social skills.

Now let’s look at some specific similarities and differences between autism and ADHD.

To qualify for the diagnosis of Autistic Disorder a person must have a triad of symptoms: deficits in social interaction; impairment in language and communication; and restricted, repetitive interests and behavior.

Attention Deficit Disorder creates a deficit in social interaction and impairment in communication so there may very well be a link when the diagnosis takes place.

If I am not paying attention when you are speaking, it is hard to communicate or socially interact… 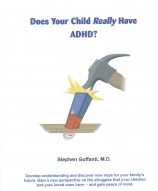 See more from his book Does Your Child Really Have ADHD?

Stephen Guffanti MD is the author of Does Your Child Really Have ADHD, The Passion Test and creator of Rocket Phoinics.  His blog, ADHDorActiveChild provides interviews, show episodes and more, including discussions about the possible link between ADHD and autism.