Math Facts In Half The Time Part 2

The previous article on Math Facts in Half The Time Part 1 talked about how to use the visual learning strategy.

We continue today with addition and subtraction and multiplication and division.

Remind them that this movie screen or magic math facts screen is either up to their left or up to their right.  Check to make sure that your child knows where their screen is located.

6.  As they are holding the fact in their visual memory position, have your child look at the fact while you say 9 + 8 is ___ and have them fill in the answer aloud.

7. Have them trace each of the numbers as you are still holding the card.

As they trace the numbers, they will also say the fact aloud in the various ways it can be presented.  Have a lot of fun with this part as it will help each child get the feel of the fact while relying on the picture.

8.  Now tell your child that their eyes are actually like a video camera and they can remember all their facts looking up to the same picture memory location where they have studied them.  Have them snap a picture of the fact and take the triangle away.

10.  Let the child know they will be taking a written test on all the forms of this fact.

11. Have them compare what they have written with what is on their triangle.  If you notice that any of their answers are incorrect, simply have them decorate their triangle with a fun drawing and practice the fact again.  If he or she has answered all the questions correctly, it can be extremely effective for them to reward themselves kinesthetically when their answer is correct.

Tell them to clap or pat themselves on the back as you say “good job” learning your math facts in half the time.

The multiplication and division process is virtually the same as the addition and subtraction one above.  However, you will be making a triangle of a different shape so the child can distinguish between the operations.

Use the inverted triangle below and follow the same procedure as for addition and subtraction.

Have your child look up and visualize (in their visual memory location of course) a problem such as ‘If I put five polar bears in pink bathing suits on my airplane and pull one out before we take off, how many are left?’  Or – use a prediction problem like ‘Susie’s dog just had eight puppies.  Five are black, two are red and one is white.  They are all in the same box.  If she lets me choose one of them (while I am wearing a blindfold), what color am I most likely to get?’ 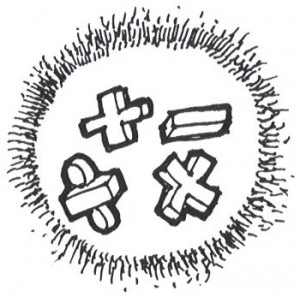 The purpose of this next exercise is to help children recognize and visualize the same figure no matter how it is turned in space.  Draw a triangle, parallelogram, trapezoid and plus sign on a sheet of large white paper.

Take another sheet of paper the same size and draw the same figures, but free rotate or turn them in other directions.  On this second drawing, add an upper case letter T and upper case letter K to these figures and turn them on their sides.   Put all figures in a different order than they appeared on the first paper.

Hold the first sheet up in front of your child.  Let them look at it for about 1 minute.  Then take it away and hold up the second sheet of paper.   Ask the children to select which shapes were among those found on the paper they first looked at.

Related articles: Math Facts in Half The Time Part 1

Pat Wyman is the best selling author of Learning vs. Testing and Instant Learning for Amazing Grades.  She is a university instructor who created the free learning styles quiz so you can share your visual, auditory and kinesthetic learning styles results with your friends, family and co-workers as well as this strategy on math facts.