Author and physician Frank Barnhill has modified a chapter from his book Mistaken for ADHD to discuss mistaking childhood depression for ADHD.

As many as one in twenty children and adolescents will experience depression between age five and age seventeen. Of these, about 50 percent will have recurrent depressive episodes well into adulthood. Since depression and anxiety tend to occur simultaneously, up to 75 percent of youth with childhood depression will suffer from anxiety.

Approximately 40 percent of all those with childhood depression will develop bipolar disorder. (Rosenbaum & Covino 2005)  These statistics are indeed sobering when one thinks of how many children will ultimately be affected by depression. 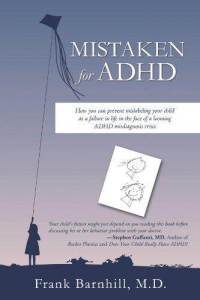 Parents are often puzzled and teachers usually baffled when I discover childhood depression to be masquerading as ADHD.

In fact, the two most asked questions in reply to my observation are, “Really now, just how can this possibly be depression and not ADHD? Are you sure?”

In fact, I would estimate that I have diagnosed depression in nearly 15 percent of all the five-to seventeen-year-olds that have been brought to my office for an ADHD evaluation. It appears that in children the symptoms that occur with a case of the blues are more often mistakenly attributed to ADD or attention deficit disorder without hyperactivity than to depression.

A National Survey on Drug Use and Health study released in May 2008 showed the rates of major depression disorder among U.S. teens age twelve to seventeen to be increasing steadily during the research period of 2004 to 2006. The study also pointed out that these statistics appear to confirm childhood depression as a major risk factor for significant impairment and mental and physical illness in young adults.

Let’s take a look at Amy’s story and see if you can spot all the elements of childhood depression masquerading as ADHD.

Amy was eleven years old and cute as a button. I glanced at her chart before entering the exam room and noted that my nurse had listed “Workup for ADHD” as the reason for her office visit. In my practice, those words usually mean “Please find out why my kid’s ADHD medicines aren’t working” or something to that effect.  So, I wasn’t prepared for what happened next.

Amy’s father was a local insurance agent with a very busy agency. He appeared hurried and a little annoyed that he was in my office in the first place. Here’s what he told me …

Amy’s teacher had called several times to complain that Amy wasn’t paying attention in class. She thought Amy “was daydreaming” and “had poor concentration.” As a result of these two observations, Amy’s teacher told her parents that she had to be ADHD, as she didn’t see anything else that could cause her problem.

Her teacher sent the following note:

“Even though Amy is on the A-B honor roll and has some of the highest grades in the class, I feel she is performing way below her potential. She’s never disruptive in class, but daydreams much of the time and can’t seem to focus on what I ask her to do. Sometimes her daydreaming causes others to do the same. She reluctantly participates in class projects and has few friends. She almost never attends after-school events and refuses to play sports during breaks. Her concentration and indecisiveness are so bad, I’m afraid if Amy isn’t immediately started on ADHD treatment, she will eventually fail. The other six ADHD kids in my class are doing great on medicines for ADHD. I have no problems with them until Amy starts her daydreaming.”

Now let’s discuss how I sorted through all of this.

Amy was physically normal and had totally normal blood work for the usual blood-test detectable ADHD.  Amy was clearly not having academic problems. Her daydreaming in class and inattentiveness could not possibly be causing other students a problem.

Her father thought she was normal and said her teacher was the only one who thought Amy had a problem. She acted a little withdrawn at church and at home, but so was her mother. It sure “doesn’t stop her from doing what she wants!” In fact, her father noted, “We never have to push her to do homework, clean her room, or take care of her guppies. She does it all on her own.”

Thus far, Amy did not meet any criteria for an ADHD diagnosis, since as her behavior:

I guess that, at this point, you could argue that Amy had ADHD-inattentive type, but there was a big problem with that diagnosis: Amy was not inattentive at home!

You might say she displayed “incomplete ADHD behavior,” I could buy into that theory, but before we cast the die, let’s take a look at what Amy told me.

She thought her teacher was just comparing her to the other “ADHD kids” in her room. (We call it transference when someone erroneously applies a mistaken attribute to another person.) Amy was very perceptive, and I preliminarily agreed wholeheartedly that such might be the case.

She told me for some reason she “got sad or blue” when she was away from her mother. Her mom had suffered from mild clinical depression for years, and Amy thought it “might be catching.” (Wow—another very insightful observation!)

Amy and I agreed that she also had these symptoms of mild situational depression:

Amy was suffering from mild clinical childhood depression. Since her symptoms only occurred about 10 to 20 percent of the time, I was pretty sure she did not have a major depression.

Likewise, I was reasonably sure she was not suffering from ADHD. She probably would have improved a little on stimulant drugs, as most depressed patients will, but why expose her needlessly to all of their terrible side effects?

Sometimes I think each of us could be accused of having a few symptoms of depression! I have heard it said that those of us most capable of handling a crisis in life have balanced pessimism and optimism. Read on and you’ll see additional signs and symptoms of depression that make it easy to confuse childhood depression and ADHD and can easily cause misdiagnosis.

Here are most of the signs and symptoms of childhood depression in children and teens:

As you can see ADHD, primarily inattentive type without hyperactivity, can mimic or easily be confused with childhood depression.

Events in a child’s or teen’s life that may cause depression are:

Obviously, the earlier childhood depression is detected and treated, the less likely these disabilities will recur or, if present, persist. Just like younger children diagnosed with depression, depressed teenagers had significant problems with academic performance, normal emotional growth and development, social interaction, and peer-family relationships.

Confusion about daydreaming and inattentiveness being associated only with ADHD girls might explain why ADHD has been so poorly diagnosed in girls in the past! It may also explain why so many girls with depression go undiagnosed and untreated.

Since a child can be both ADHD and have childhood depression on top of it, it is essential that both be detected as soon as possible.

We’ve found, that if childhood depression is properly treated, often the symptoms of ADHD will improve or go away.

Likewise, if ADHD is properly diagnosed and treated, your child’s depression symptoms will usually do the same.

Allow me to point out that girls are most often diagnosed with the inattentive type of ADHD because of the same bias that landed Amy in my office; they are thought to be daydreamers, spacey, or airheaded.

Boys are less likely to be diagnosed as ADHD-inattentive type because they are usually hyper instead of quiet and withdrawn.

So, what’s the worst that can happen if a child is misdiagnosed with ADHD and treated with stimulants instead of medications for childhood depression? How about lifelong depression, failure in school, social isolation, and feelings of worthlessness, despair, hopelessness, and, possibly … suicide!

Major depression does not respond well to counseling, behavior training, or what is known as cognitive therapy, unless an antidepressant drug is added to therapy. In general, serious depression cannot be cured by psychological counseling alone!

Moreover, antidepressant medications definitely work better when combined with counseling or some type of cognitive behavior training, regardless of how severe the childhood depression.

Dr. Frank Barnhill is a family physician with 29 years experience. He is the author of Mistaken for ADHD which lists the 52 conditions that can mimic ADHD. Visit Dr. Barnhill’s website MistakenForADHD for more information on childhood depression masquerading as ADHD.