Count Your Blessings: Be Aware of Carbon Monoxide Poisoning 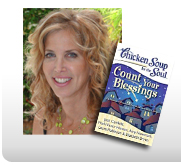 Author Elizabeth Bryan and her family survived a terrifying brush with death by accidental carbon monoxide poisoning a decade ago in Manhattan when a worker in her home disengaged their CO detector, thinking a faulty battery caused the beeping.

She is so grateful to be alive that she’s made it her mission to raise awareness about carbon monoxide poisoning by writing a story that shares her experience.

She teamed up with First Alert and several California city mayors to create the first “California CO Alarm Law Installation Week.”  In California, a recent law was enacted requiring homeowners of single family residences to install alarms but surveys indicate they are not complying.

To quote Bryan, “People do not believe something like carbon monoxide poisoning can happen to them, and my family is living proof that it can and does with much greater frequency than anyone thinks.”

According to Mark Wolfe, Executive Director, National Energy Assistance Directors’ Association, “Lower income families have to struggle to pay their energy bills every month. Many have to choose between paying their heating bill and paying for food, medicine and other essentials.

We know that CO detectors can help save lives, yet for many poor families the purchase of a CO detector is viewed as an unaffordable necessity when they are faced with food and utility bills they can ill afford.

Add this to the fact that many of these families also can’t afford the same level of required maintenance on their heating systems and the dangers become even greater.”  In California alone, there are about five million eligible households for energy assistance. Sadly, in 2010, there was only sufficient funding to reach about 288,000 of these homes.

News reports said the generator was being used after the home’s power had been shut off.  According to the Center for Disease Control, more than 20,000 people per year end up in emergency rooms across the nation as a result of accidental carbon monoxide poisoning after being exposed to the deadly gas.

Bryan adds that the upcoming holiday season is a time of increased risk of carbon monoxide poisoning as people are typically entertaining indoors with homes sealed up and little ventilation while using many fuel burning appliances at once.

Appliances like the stove, furnace, hot water heater, blocked chimney or flu or a car left running in an attached garage – even with the door open – can release CO into the home.

Because you can’t see, smell or taste carbon monoxide, it can cause terrible tragedy.

Along with local health officials and First Responders, Bryan will be part of a series of events aimed at educating homeowners and urging them to install detectors in order to protect their families from carbon monoxide poisoning.

“At a cost of as little of $18, installing a CO detector is one of the least expensive ways to prevent a death,” says Bryan.

I am hoping people will read my story and understand the risks.  My entire family wouldn’t be here if it weren’t for a CO detector.  I am grateful for the new laws, but we have to do this for our families.”

According to the American Medical Association, carbon monoxide poisoning is the leading cause of accidental poisoning deaths in the United States.

Carbon Monoxide Detectors can be purchased in California at Lowe’s, Sears, Target and Ace stores.

Elizabeth Bryan is the Co-Author of CHICKEN SOUP FOR THE SOUL: COUNT YOUR BLESSINGS

Pat Wyman is the best selling author of Instant Learning for Amazing Grades, Learning vs. Testing, founder of HowToLearn.com, and the creator of the Personal Learning Styles Inventory.  She is a university instructor of continuing education and frequent media guest.

Pat encourages you to take all precautions to be safe and protect your family from accidental carbon monoxide poisoning.