Discovery May Lead to Safer Treatments for Asthma, Allergies and Arthritis

Scientists find link between biological clock and sugar metabolism which may lead to safer treatments for asthma, allergies and arthritis. 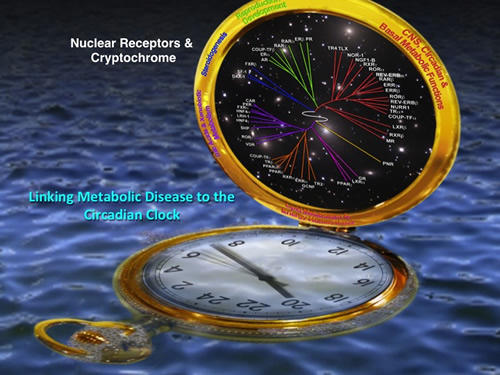 Scientists have discovered a missing link between the body’s biological clock and sugar metabolism system, a finding that may help avoid the serious side effects and offer safer treatments for asthma, allergies and arthritis.

In a paper published last week in Nature, scientists at the Salk Institute for Biological Studies report finding that proteins that control the body’s biological rhythms, known as cryptochromes, also interact with metabolic switches that are targeted by certain anti-inflammatory drugs.

The finding suggests that side effects of current drugs might be avoided by considering patients’ biological rhythms when administering drugs, or by developing new drugs that target the cryptochromes.

“We knew that our sleep and wake cycle are tied to when our bodies process nutrients, but how this happened at the genetic and molecular level was a complete mystery,” says Ronald M. Evans, a professor in Salk’s Gene Expression Laboratory, who led the research team.

“Now we’ve found the link between these two important systems, which could serve as a model for how other cellular processes are linked and could hold promise for better therapies.”

They function in cells by interacting with glucocorticoid receptors, molecular switches on the outside of the nucleus, which Evans first discovered in 1985.

Glucocorticoids are steroid hormones that occur naturally in the body and help control the amount of sugar in a person’s blood, so that nutrient levels rise in the morning to fuel daily activities and fall again at night. They function in cells by interacting with glucocorticoid receptors, molecular switches on the outside of the nucleus, which Evans first discovered in 1985.

Glucocorticoids also play a role in regulating inflammation and are used as anti-inflammatory drugs for diseases caused by an overactive immune system, such as allergies, asthma and rheumatoid arthritis. They are also used to treat inflammation in cancer patients.

However, because of their role in sugar metabolism, the steroids can disrupt a person’s normal metabolism, resulting in dangerous side effects, including excessively high blood sugar levels, insulin resistance and diabetic complications.

The Salk researchers may have found a way around these side effects by discovering a new function for cryptochromes 1 and 2, proteins that were previously known for their function in the biological clock.

In their new study on mouse cells, Evans and his colleagues made the surprising discovery that cryptochromes also interact with glucocorticoid receptors, helping to regulate how the body stores and uses sugar.

“We found that not only are the crytopchromes essential to the functioning of the circadian clock, they regulate glucocorticoid action, and thus are central to how the clock interacts with our daily metabolism of nutrients,” says Katja A. Lamia, an assistant professor at The Scripps Research Institute and former post-doctoral researcher in Evan’s laboratory at Salk.

Mouse cells function much like human cells, so the findings could have important implications for treatment of autoimmune diseases and cancer. By taking into account the daily rise and fall of cryptochrome levels, the scientists say, doctors might be able to better time administration of glucocorticoid drugs to avoid certain side effects related to sugar metabolism.

The discovery also raises the possibility of developing new anti-inflammatory drugs that avoid some side effects by targeting cryptochromes instead of directly targeting the glucocorticoid switches.

More broadly, Evans says, the study may help explain the connection between sleep and nutrient metabolism in our bodies, including why people with jobs that require night work or erratic hours are at higher risk for obesity and diabetes.

“Disrupting the normal day-night cycle of activity may prevent a person’s biological clock from synchronizing correctly with their daily patterns of nutrient metabolism,” Evans says. “As a result, the body might not store and process sugar normally, leading to metabolic disease.”

Wyman encourages you to go to Nature.com for more information on this new discovery that may lead to safer treatments for asthma, allergies and arthritis.