The scene is a familiar one. It is a late autumn day, and you wake up in the morning with a slight sore throat. Since it has been very cold outside, your forced air furnace has been running frequently through the night. Assuming the sore throat is just from the dry air in the house, you decide to shower and get ready for work. 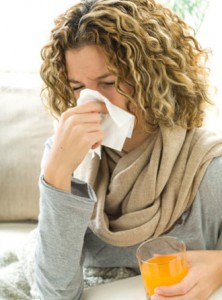 Several hours later, the sore throat has become so severe it is hard to swallow liquids. Body aches are wracking your joints and muscles, and the weakness is becoming overwhelming. The dry cough is making your head pound. Your boss takes one look at your bloodshot eyes, looks worried, and sends you home early.

You feel too weak to drive, so a friend drives you home. The next several days are spent in bed, where you drift in and out of sleep. Gradually, over the next week, you slowly recover. The body aches and fever are gone, but the dry cough remains for another week.

The above scenario is repeated endless times during the influenza season – a lightening-fast onset of an upper respiratory illness that incapacitates patients within hours of onset.

You are fine and then all of a sudden, seemingly out of no where you are fighting the flu.

Thousands of people worldwide die of complications from influenza every year. Influenza is usually around during the colder months of the year. Typically, influenza season starts around December, and ends by late spring. Some years, the season starts much earlier and may last longer.

The severity of the illness associated with infection by the influenza virus also varies from year to year. The virus responsible for influenza changes every year. Since other animals may be infected with similar viruses, the dominant virus affecting a population may have roots in pigs or birds that are also infected.

The recent H1N1 epidemic is a good example – the virus was a product of a combination of an infection that originated from pigs and chickens, and later was able to spread to the human population.

Because the virus is always changing, a new vaccine needs to be developed every year to protect the population. Several strains of influenza virus are combined into a single vaccine, to give the best possible protection for the influenza season. The virus is grown in great numbers using chicken eggs, purified, and killed (or inactivated).

The best way to avoid getting influenza is to be vaccinated every year. This is especially important for those at high risk for the complications of influenza. If you are pregnant, over the age of 65, or suffer from a long term or serious medical condition, you are at an increased risk for complications.

Afraid of needles? Most patients get the ‘flu shot’, but a nasal vaccine is also available that consists of a weakened (but not killed) virus. There is always a chance the vaccine will not provide optimum immunity for the strains of influenza in the community, since the virus may change over time, or a new dominant strain may emerge.

Other ways to help avoid getting infected with influenza include staying well hydrated, since a healthy coating of mucous in your nose and throat is very protective. Washing your hands frequently and avoiding touching your eyes and nose is important. Eating right, regular exercise and getting enough rest are also essential.

Staying away from pigs and birds will not help you avoid influenza, in most cases. Go ahead and eat that bacon with impunity!

So now you are fighting the flu, even after doing everything right?

If treated early (within 48 hours of the onset of symptoms), some medications can shorten your misery by 1-2 days. Tamiflu is a well known medication that may help. An older medication, Amantadine, is effective for a particular strain of influenza, but it has more side effects. Antibiotics are not effective for influenza itself, but may be used if an associated bacterial infection is also present.

Treating the symptoms, getting plenty of bed rest, and lots of liquids are essential for treating influenza symptoms. Persons infected with influenza start being contagious at the first sign of symptoms, and continue for up to 2 weeks.

Isolating yourself from others, or wearing a protective mask when in public can also help. (Wearing a mask in public is always a good way to turn heads and worry those you pass on the street…).

HowToLearn.com thanks Dr.Timothy Gerard Moser for writing this article.