New study demonstrates clearly that teens have harmful listening habits when it comes to iPods and other MP2 devices.

One in four teens is in danger of early hearing loss as a direct result of these harmful listening habits, says Prof. Chava Muchnik of TAU’s Department of Communication Disorders in the Stanley Steyer School of Health Professions at the Sackler Faculty of Medicine and the Sheba Medical Center. 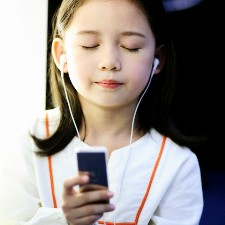 “In 10 or 20 years it will be too late to realize that an entire generation of young people is suffering from hearing problems much earlier than expected from natural aging because of harmful listening habits,” says Prof. Muchnik.

Hearing loss caused by harmful listening habits like continuous exposure to loud noise is a slow and progressive process. People may not notice the harm they are causing until years of accumulated damage begin to take hold, warns Prof. Muchnik.

Those who have harmful listening habits, misusing MP3 players today might find that their hearing begins to deteriorate as early as their 30’s and 40’s — much earlier than past generations.

The first stage of the study included 289 participants aged 13 to 17. They were asked to answer questions about their habits on personal listening devices (PLDs) — specifically, their preferred listening levels and the duration of their listening.

In the second stage, measurements of these listening levels were performed on 74 teens in both quiet and noisy environments. The measured volume levels were used to calculate the potential risk to hearing according to damage risk criteria laid out by industrial health and safety regulations.

The data indicate that a quarter of the participants are at severe risk for hearing loss due to harmful listening habits.

Currently, industry-related health and safety regulations are the only benchmark for measuring the harm caused by continuous exposure to high volume noise. But there is a real need for additional music risk criteria in order to prevent music-induced hearing loss, Prof. Muchnik says.

In the meantime, she recommends that manufacturers adopt the European standards that limit the output of PLDs to 100 decibels. Currently, maximum decibel levels can differ from model to model, but some can go up to 129 decibels.

Steps can also be taken by schools and parents, she says. Some school boards are developing programs to increase awareness of hearing health, such as the “Dangerous Decibels” program in Oregon schools, which provides early education on the subject.

Teens could also choose over-the-ear headphones instead of the ear buds that commonly come with an iPod.

In the near future, the researchers will focus on the music listening habits of younger children, including pre-teens, and the development of advanced technological solutions to enable the safe use of PLDs.

Today’s ubiquitous MP3 players permit users to listen to crystal-clear tunes at high volume for hours on end — a marked improvement on the days of the Walkman. These advances have also turned personal listening devices into a serious health hazard. Teenagers with harmful listening habits are the most at-risk group.

Wyman suggests talking with your teen about the potential risks of harmful listening habits.