Where Does Prejudice Come From?

Where does prejudice come from? Not from ideology, say the authors of a new paper.

In a new article published in Current Directions in Psychological Science, a journal of the Association for Psychological Science, Arne Roets and Alain Van Hiel of Ghent University in Belgium look at what psychological scientists have learned about prejudice since the 1954 publication of an influential book, The Nature of Prejudice by Gordon Allport.

People who are prejudiced feel a much stronger need to make quick and firm judgments and decisions in order to reduce ambiguity. “Of course, everyone has to make decisions, but some people really hate uncertainty and therefore quickly rely on the most obvious information, often the first information they come across, to reduce it” Roets says.

That’s also why they favor authorities and social norms which make it easier to make decisions. Then, once they’ve made up their mind, they stick to it. “If you provide information that contradicts their decision, they just ignore it.” 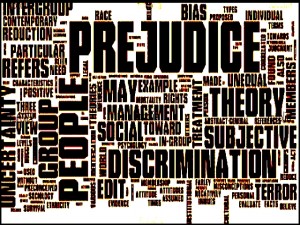 Roets argues that this way of thinking is linked to people’s need to categorize the world, often unconsciously. “When we meet someone, we immediately see that person as being male or female, young or old, black or white, without really being aware of this categorization,” he says.

“Social categories are useful to reduce complexity, but the problem is that we also assign some properties to these categories. This can lead to prejudice and stereotyping.”

People who need to make quick judgments will judge a new person based on what they already believe about their category. “The easiest and fastest way to judge is to say, for example, ok, this person is a black man.

If you just use your ideas about what black men are generally like, that’s an easy way to have an opinion of that person,” Roets says. “You say, ‘he’s part of this group, so he’s probably like this.’”

It’s virtually impossible to change the basic way that people think. Now for the good news:

It’s possible to actually use this way of thinking to reduce people’s prejudice.

If people who need quick answers meet people from other groups and like them personally, they are likely to use this positive experience to form their views of the whole group. “This is very much about salient positive information taking away the aversion, anxiety, and fear of the unknown,” Roets says.

Roets’s conclusions suggest that the fundamental source of prejudice is not ideology, but rather a basic human need and way of thinking. “It really makes us think differently about how people become prejudiced or why people are prejudiced,”

Roets says. “To reduce prejudice, we first have to acknowledge that it often satisfies some basic need to have quick answers and stable knowledge people rely on to make sense of the world.”

For more information about this study, please contact: Arne Roets at Arne.Roets@UGent.be

Bullying and Why it Occurs