Today is the winter solstice in the Northern Hemisphere, bringing us the shortest daylight period and longest night of the year. If you’ve grown weary of short days and are looking forward to more sunlight, you won’t have to wait much longer.

Going forward, the days will gradually lengthen as the sun climbs higher in the sky over the next six months. 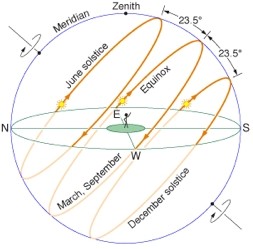 Compared with the summer solstice and equinoxes, the winter sun shines at a low angle and spends little time above the horizon. (Daniel V. Schroeder, Weber State University)

This year, the winter solstice occurred this morning at 12:30 a.m. EST.

As the first day of astronomical winter* in the Northern Hemisphere, the winter solstice marks the time at which the sun shines directly overhead at 23.5 degrees south latitude.

With the North Pole tilted away from the sun, locations north of the equator see the sun take its lowest and shortest path across the southern sky.

Why do the earliest sunset and latest sunrise not fall on the winter solstice?

Careful sun observers are quick to note that the earliest sunset and latest sunrise of the year do not coincide with the winter solstice.

Washington, D.C. saw its earliest sunset at 4:46 p.m. from December 2 through December 13, which means the sun has already been setting a few minutes later for the past week.

Yet the sun continues to rise later, with the latest sunrise occurring at 7:27 a.m. from December 31-January 10.

What causes this discrepancy? To begin, it helps to understand the two “competing” forces that determine local sunrise and sunset times: 1) Changes in the sun’s declination, or height above the horizon throughout the year, and 2) The changing time of solar noon.

Solar noon occurs when the sun reaches its maximum height in the sky on any given day. At any location on Earth, the time of noon slowly oscillates back and forth by several minutes throughout the year (in other words, a sundial would not consistently show noon occurring at the same time as your wristwatch).

These shifts are due to the earth’s elliptical (non-circular) orbit and axial tilt, and are summed up in a complex relationship called the equation of time (for simplicity, let’s call it the “solar noon effect”).

The reason the earliest sunset occurs before the winter solstice has to do with the later shift in solar noon “outweighing” the effect of the sun’s decreasing height and length of time above the horizon.

For example, in D.C. solar noon is at 11:57 a.m. on December 1, but drifts 14 minutes later – to 12:11 p.m. – by December 31. This forward shift means that it takes a few seconds more than 24 hours for the sun to complete a full circle between its maximum noontime height from one day to the next.

Meanwhile, as we approach the winter solstice, the sun’s declination is no longer changing as rapidly, which causes the days to shorten at a slower pace. 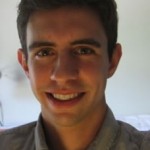 Justin Grieser is a D.C. area native whose fascination with weather and climate patterns has largely been a self-taught hobby. In 2009, Justin received his bachelor’s degree from the University of Virginia with a double major in Linguistics and French (hence his username ‘meteorolinguist’). Justin recently completed coursework on climate systems and severe weather at George Mason University.

Thanks to Justin for helping us learn more about the winter solstice.