The Big Game is quickly approaching, and as parties are organized it’s easy to just serve the typical party foods that seem to be a staple at any gathering.

But most of these party foods are extremely unhealthy because they are loaded in fat, calories, sodium and sugar.

Highlighted here are the worst offenders, to help the Big Game party hosts make healthier choices for their party foods.

While pizza may be the easiest of all party foods to prepare – just call the local pizza joint and order a few supreme pies, it’s really bad for the body. Pizza, especially from the big name chains, is loaded with fat, calories, salt and simple carbohydrates that will wreak havoc with blood sugar.

If pizza is desired, it can easily be made at home, in advance with high quality ingredients, such as a whole grain crust, fresh sauce, fresh veggies and cheese and the like. In addition, if it’s made at home, toppings can be as exotic as you and your guests would like, which often is not available from the delivery pizza joints.

Party foods are often selected because of their convenience. While frozen potato skins are certainly convenient, these snacks are loaded with trans fat and calories.

In just one serving of some of the most popular brands, there are typically 200 calories and 12 grams of fat per serving. Even more shocking is the fact that one serving consists of just three small potato skins.

If potato skins are on your list of party foods, the majority of the work can be done a day or two ahead of time, using fresh potatoes and low fat toppings. 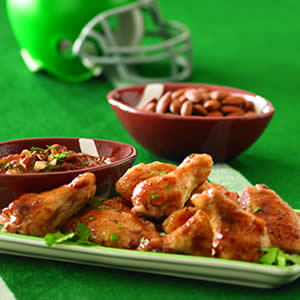 Popular party foods usually always include wings. These are extremely popular during any party, but just one fried chicken wing contains four grams of fat.  So imagine how much fat someone is eating if they have 10 wings, which is extremely easy to do while watching a great game of football.

Instead, a better option is baked, skinless chicken breasts made at home. It’s simple to do and much better for the heart. For an even healthier option, squeeze some lemon on those chicken breasts and grill them with some fresh vegetables for some chicken kebobs – now you’ve got the ultimate party foods!

Face it – fried cheese sticks taste so good they might as well be illegal because they’re a heart attack waiting to happen. One serving of these is just two sticks, and for that small amount of food, a person is eating 120 calories, half of those calories are from fat and they contain 6 grams of fat and 230mg of sodium.

Unfortunately there is really no way to make cheese sticks healthy, so it’s best to just avoid them altogether when preparing your menu of party foods.

Jalapeño poppers are very popular party foods, but they are really, really bad. These cream cheese stuffed peppers are breaded and fried, which just adds to the potential that after eating a few, someone will need a cardiologist. One serving of these fat bombs is just three peppers and they contain 280 calories and a whopping 19 grams of fat.

These can be made at home, and the reduction in fat and calories is amazing. By using reduced fat cream cheese, egg beaters and baking the poppers these can be reduced to less than 62 calories and 3 grams of fat. And they won’t taste like the freezer.

Nachos are typically loaded with all sorts of fat laden, high calorie ingredients making them bad for just about everyone. But there are ways to cut some of the fat and calories out of nachos.

First, use baked chips. It’s easy enough to bake them at home, and they’ll be nice and fresh. Next use low fat ingredients, such as ground turkey, low fat cheese, and light sour cream. Other toppings such as green onions, tomatoes, black olives and even avocado are toppings that are actually good for the body, so feel free to load up on party foods like these.

Make your party foods healthier with a spinach and artichoke dip recipe that uses ingredients that are low on fat and big on taste.

Potato chips are notoriously high in fat and sodium. Every ounce of potato chips contains 155 calories, 10.6 grams of fat and 149mg of sodium. Baked potato chips are considerably lower in fat and calories, but they can still be high in sodium. Since French onion dip is best avoided, skipping the potato chips probably isn’t a bad idea and without the dip, it’s likely that no one would notice if they aren’t in your spread of party foods.

Soft drinks can best be summed up as 150 empty calories in a can. They are loaded with sugar and caffeine and are just plain bad for you.

If a fizzy drink is desired, a much better option is the Italian soda or some carbonated water mixed with fresh fruit for a bubbly, non-alcoholic, juice cocktail.

When it’s time for the big game, the mass consumption of beer and party foods is sure to follow. Beer and football have gone hand in hand long since before people can remember. But that doesn’t mean you have to stick to an old, unhealthy tradition that can lead to binge drinking, poor liver function and alcoholism.

These are just some of the worst Big Game party foods; there are many more party foods that didn’t make this list, so no cheating.

However, whatever someone’s tastes are, there are always ways to make party foods healthier, and a healthier diet is good for everyone.

Wendy Innes has been a freelance writer since 2007. She is a regular contributor to SymptomFind while pursuing her education in new media journalism as well as natural healing. Her interests include mental health, nutrition, fitness, women’s health and natural health care such as homeopathy, aromatherapy and massage.