How The Hippocampus Affects Recollection Memory

The hippocampus is an important brain structure for recollection memory, the type of memory we use for detailed reliving of past events.

Now, new research published by Cell Press in the December 22 issue of the journal Neuron reveals characteristics of the human hippocampus that allow scientists to use anatomical brain scans to form predictions about an individual’s recollection ability.

The new research helps to explain why this relationship has been hard to find in the past and provides evidence for a possible underlying mechanism. 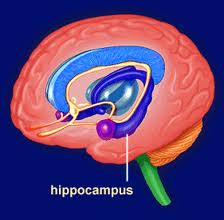 The hippocampus, a deep brain structure named for its curving seahorse shape, can be divided into anterior and posterior portions.

Although research has generally linked smaller hippocampi with worse recollection in neuropsychological patients and during aging, this relationship has not held up among healthy young adults.

“There is some evidence that extensive spatial memory acquisition leads to enlargement of the posterior hippocampus and a decrease in the anterior hippocampus,” explains lead study author, Dr. Jordan Poppenk who conducted the study at Baycrest’s Rotman Research Institute.

“This suggested to us that the crucial predictor of individual differences in recollection ability might not be the overall size of the hippocampus but the separate contributions of the posterior and anterior segments of the hippocampus.”

This finding explains the longstanding failure to correlate the overall size of the hippocampus with memory,” concludes Dr. Poppenk. “We also provide evidence that it is the functional connections, possibly related to memory consolidation, between the posterior hippocampus and other parts of the brain that may underlie enhanced memory recollection.”

HowToLearn.com thanks ScienceDaily for providing this article on the hippocampus.