A designer uses creative problem solving every day. They see the world differently than the rest of us. They’re constantly deconstructing and rebuilding objects and ideas that most of us accept as static and fixed.

Creative problem solving is responsible for the progression of the first behemoth portable computer to Apple’s glossy little iPhone. It is evidence of the enormous impact designers have on our lives. Everything is negotiable, malleable, and improvable.

What if the designers process of creative problem solving were true for the learning process?

What if teachers reinvented how knowledge is passed along? To that end, members of the k12 Lab, an educational research program at Stanford University’s Institute of Design, want to make designers out of teachers.

By applying the techniques of creative problem solving & product design to education, they want to loosen the narrow, rigid process of traditional learning and show teachers how to tap into students’ deep wells of creativity, encourage them to see nuanced problems from inside the very core of an issue, and make critical thinking essential to creative problem solving.

The k12 Lab has distilled the creative problem solving process down to the following steps:

All around their office in Stanford, California, the creative problem solving process is illustrated on whiteboards: A word circled in the center of the board indicates the subject at hand, while related ideas radiate out from the center, like branches on a family tree with many cousins.

Melissa Pelochino, a teacher at an economically disadvantaged school in nearby East Palo Alto, is a k12 Lab convert. After attending a workshop, she had an important realization.

“Our kids spend their time trying to figure out what answer the teacher wants to hear rather than on what they want to say,” she explains. “They don’t know how to process information without a how-to guide, with a model and an example for everything. 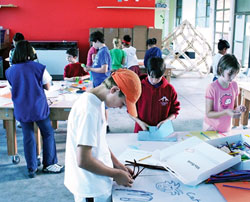 We need to be asking our kids questions that don’t have predetermined outcomes. We need to let them explore and construct and investigate and try and, most important, fail.” Each iteration, k12 Lab’s theory goes, will lead to even better ideas and more creative problem solving.

Pelochino tested the theories by asking her seventh and eighth graders to tackle bullying as a creative problem solving challenge. She began by having the class read Tuesday of the Other June, by Norma Fox Mazer, a story about a young girl who’s tormented by a classmate.

Then the kids staged a bullying scene outside the school lunchroom, where a student is being taunted about a pair of pants. Classmates videotaped the reaction of passersby with a hidden camera: Only one stopped to intervene.

The impact of the experience on the class was dramatic. “By the end of the assignment, kids were crying and arguing and were excited to make a change in their community,” Pelochino says. “The observation phase, as the scene was being enacted, created space and purpose for really looking and listening to each other.”

For perhaps the first time in their lives, the students considered the issue from multiple perspectives — empathizing with the bully, the victim, and the bystanders who chose not to intervene.

Pelochino applied another creative solving problem challenge to a scenario that resonated profoundly with a student whose father was in jail: how to make prison life more tolerable. For background, the class read Walter Dean Myers‘s novel Monster and some related articles about incarceration. They also heard from the boy whose father was in prison about his visits to his dad.

The class responded with two prototype ideas to improve prison life. One was a reusable portable food tray to give prisoners a choice of where they eat, the other a hanging curtain within a cell that inmates could close for privacy.

They tested their prototypes at the Elmwood Correctional Complex, in Milpitas, California, and received feedback from a security guard on how to refine their ideas.

“For some of these students, this was their first positive interaction with law enforcement,” Pelochino says.

Continue Reading This Article at Edutopia by Tina Barseghian… 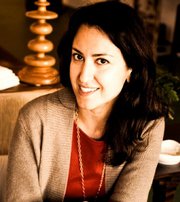 Tina Barseghian is an experienced editor, writer, and producer who creates engaging content across a broad range of topics. She’s worked for a number of award-winning websites, magazines, and newspapers.