How Does Homeopathy Work? An Essential Guide

Depending upon the person, homeopathy is either the best form of medicine available, or it’s a pseudoscience that is ineffective.

However, given its history, it’s clear that homeopathy, while not as popular as it once was, is a commonly used option to treat illness, particularly in those who don’t have access to mainstream allopathic medical care.

A Brief History of Homeopathy

Homeopathy is the creation of Dr. Samuel Hahnemann. Hahnemann, a German physician, graduated from medical school in 1779 and immediately saw problems in the common medical practices of his time.

These treatments included bleeding, blistering and herbal emetics. In fact, it is believed by many that the common medical practices of bleeding and blistering were responsible for the death of George Washington in 1799.

While researching cinchona bark, a common effective treatment for malaria at the time, Hahnemann developed his principle of “similars”. Using himself as a test subject, he discovered that the same herbal preparation that was being used effectively to cure malaria also induced symptoms of the disease in healthy people.

Using the principle of similars, Hahnemann and his colleagues began testing other substances that were used as medicine at the time. Through his research, Hahnemann determined that the same concentrations that induced symptoms in healthy people were far too strong to treat illness. Because of this, homeopathic medicines are usually heavily diluted.

In 1810, Hahnemann wrote his medical treatise called “Organon of Rational Therapeutics.” It has been republished many times, but the version that is still used today was published in 1921, at the end of the homeopathy popularity, until it’s resurgence in the 1970’s. Today homeopathy is the second largest system of medicine in the world, according to the World Health Organization.

As stated above, homeopathy uses the principles of similars. The theory of similars is that if something causes symptoms in a healthy person, then it should be used to treat those same symptoms in someone who is not well.

However the substance needs to be highly diluted. According to Dr. Hahnemann’s treatise, the more diluted a particular substance is, paradoxically, the more powerful it is. 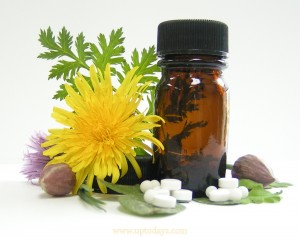 The response to treatment is thought to follow the “Laws of the Cure” which says:

Because of the dilution of medicines used in homeopathy, reading the labels can be a bit tricky. They will have letter and a number, such as 6X or 200c, etc. The letter refers to the number of parts of the dilutent substance (either water or alcohol). The number represents the concentration of the tincture of the original botanical.

Homeopathy is the second most popular medical system of medicine in the world and beyond the medicines and dosages used, works very much like mainstream allopathic medicine.

A patient should still see a homeopathic physician before taking any sort of remedy, however some remedies are readily available in most health food stores so self diagnosis is not uncommon among those who believe in homeopathy as a healing practice.

Homeopathy can possibly cure many ailments, and is often used for treating such conditions as insomnia, tinnitus (ringing in the ears), the symptoms of the flu and colds, pain of many different varieties, and common childhood ailments like teething.

Often, even if homeopathy can’t cure an ailment, it can help relieve the symptoms and allow the body’s immune system to do the rest.

Ongoing research is still being conducted at this time to verify the validity and effectiveness of homeopathy.

What Homeopathy Can’t Do

The same is true for things like broken bones and lacerations that would require stitches. Homeopathy can however help with swelling, pain relief and infection prevention.

According to the National Center for Complementary and Alternative Medicine, homeopathic remedies should be prepared in accordance with the Homeopathic Pharmacopeia of the United States (HPUS), which was written into law in the Federal Food, Drug, and Cosmetic Act in 1938.

Homeopathy Licensing And Certification For Practitioners

Some states offer certification for homeopathic assistants, but they must practice under the supervision of a licensed physician. Homeopathic practitioners are usually licensed doctors of other specialties or naturopathy.

National certification for homeopathy is available through some organizations, but state licensing is still required to be able to practice.

Homeopathy is a great system of healthcare for those who don’t have access to, want to compliment, or choose not to use mainstream allopathic medicine.

Patients should still use the same caution when choosing providers and treatments as those who use mainstream medicine. But the reward for the caution is better health and that’s something everyone can use.

Wendy Innes has been a freelance writer since 2007. She is currently pursuing her education in new media journalism as well as natural healing. Her interests include mental health, nutrition, fitness, women’s health and natural health care such as homeopathy, aromatherapy and massage. Currently based out of Virginia Beach, Virginia, she loves to travel and is an avid boxer, model and mom.