Take A Nap To Boost Your Memory Skills

A new study finds that grabbing a nap can boost your memory skills.

We’ve known a good night’s sleep is crucial to storing knowledge learned earlier in the day — but now we know a nap in the afternoon can boost the memory skills too.

Volunteers who took a 100-minute nap before launching into an evening task to test memory skills, scored an average of 20 percentage points higher on the memory skills test compared with people who did the memorization without snoozing first.

“It really seems to be the first evidence that we’re aware of that indicates a proactive benefit of sleep,” study co-author Matthew Walker, a professor of psychology and neuroscience at the University of California, Berkeley, told LiveScience.

“It’s not simply enough to sleep after learning,” Walker said. “It turns out you also need to sleep before learning and using your memory skills.” 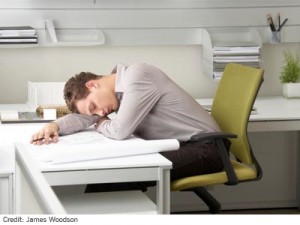 Earlier research has found that dreams boost learning, with one study suggesting a 90-minute nap may help lock in long-term memories and boost memory skills.

But Walker’s research, published in the journal Current Biology, finds that another phase of sleep, called nonrapid eye movement (NREM) is most closely linked to the boost in memory skills you get from a nap.

Walker and his colleagues recruited 44 volunteers — 27 women and 17 men — to come to the sleep lab at noon. First, the volunteers were given a memory skills task in which they had to memorize 100 names and faces. Then they were tested for how well they recalled the face-name matches.

Next, the researchers tucked half of the volunteers in for a nap between 2 p.m. and 3:40 p.m. The scientists measured the napping volunteers’ brain waves as they slept. The other group of participants stayed awake and did daily activities as they normally would.

At 6 p.m., both groups memorized another set of 100 faces and names and were tested on their memory. (The experiment was set up so nappers had more than an hour to shake off any remaining fuzziness before the test, Walker said.)

Secondly, the brain-wave monitoring turned up a likely culprit for the memory skills upgrade: a short, synchronized burst of electrical activity called a sleep spindle. These sleep spindles last about one second and can occur 1,000 times per night during NREM sleep.

People who had more of these spindles, especially people who had more over a frontal area of the brain called the prefrontal cortex, showed the most refreshment in memory skills and learning capacity after their nap, Walker said.

Walker and his colleagues suspect that the sleep spindles are working to transfer information from the hippocampus, a small area deep in your brain where memories are made, to the prefrontal cortex, which serves as long-term storage. That frees up the hippocampus to make new memories, Walker said.

“It’s almost like clearing out your informational inbox of your e-mail so you can start to receive new e-mails the next day,” he said.

NREM sleep and sleep spindle frequency change throughout a person’s life span, Walker said. Older people, for example, have a decline in sleep spindles, suggesting that sleep disruption could be one reason for the memory loss prevalent in old age.

The volunteers in the current study were young, but the researchers hope to investigate the effect of sleep spindles on learning and memory skills in older adults, Walker said.

“Somewhere between infancy and early adulthood, we abandon the notion that sleep is useful,” Walker said. That needs to change, he said: “Sleep is doing something very active for things like learning and memory. I think for us as a society to stop thinking of sleep as a luxury rather than a biological necessity is going to be wise.”

Tips On How To Remember What You Study