Storytelling of African folk tales has been a vital part of traditional African cultures for thousands of years.

Though television has weakened its presence in some communities, the tradition continues.

They are told within families and villages, at celebrations, during social and spiritual rituals, and as an important part of a child’s upbringing.

Traditional bards, called griots, are found in many African countries, particularly those strongly influenced by Islam. These professional storyteller musicians can be known for their work locally, in just one village, or over different regions if they are patronized by the wealthy.

Their demanding speech, music and memorization training often includes a spiritual dimension, as many African people believe a special power is released by sung or spoken words.

In communities with no appointed bards, children are schooled in storytelling by an older relative. In the villages, folk tales have for thousands of years been told around a fire at night, with everyone participating.

Among the characters found in African folk tales, the “trickster” is a common one.

Though often an animal, it may also be a god, man or woman who is very clever or who creates conflict. The tortoise, snake, hare and spider often display bad human behavior, such as stealing or lying.

In West African folk tales there is a wandering spirit, a trickster called Eshu by the Yoruba people and Legba by the Fon.

Though he can cause disagreements and upset among people, he sometimes brings a message from the highest deity. 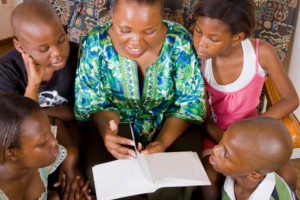 In African folk tales from Liberia, “Spider and the Honey Tree,” Spider thinks of himself as wise, but is fooled by a little girl who knows he only wants to take all the fruit she had planned to bring to her family.

She lets Spider eat his fill, so that when he climbs into a hole in the last tree to eat its honey, his stomach becomes too big for him to get out again. A wisdom tale: Spider’s greed has brought his own ruin.

Animals can also help humans: the San Bushmen African folk tales tell of a sacred praying mantis who taught them how to speak and make fire.

The African folk tales from Bambara of Mali speak of an antelope that taught them how to farm. Creation myths abound, explaining how the earth was formed or how different animals came to have their physical characteristics.

Wisdom teachings are found in many African folk tales.

In the traditional Zulu story, “Jabu and the Lion,” cow herder Jabu is fooled by a lion who promises not to eat the boy if Jabu will release him from a trap. Once released, the lion announces he will eat the boy after all.

A jackal comes along and hears this story, and tricks the lion into putting his head back into the trap. Once there, the jackal snaps the trap shut again, imprisoning the lion. “The boy is right, Nkosi,” the Jackal tells the Lion. “Broken promises always catch up with you!”

In the Liberian African folk tales, “The Chief Who Was No Fool,” a wise chief matches wits with his clever and beautiful wife. She is excellent at solving riddles—a part of how African children are taught to think creatively and wisely.

The chief is outraged at her interference in his decision making, until she outwits him with his own rules. Then he laughs and forgives her, appreciating her wisdom.

In the African folk tales about the creation myth of the West African Yorubas, the earth was originally covered with water. God sent his messenger Obatala to help him create the world. Obatala brought his servant Oduduwa, a calabash tree full of soil in its roots, and a chicken.

They climbed down to earth by a rope. But they joined at a feast along the way, and Obatala got too drunk to continue. So Oduduwa picked up the calabash tree and the chicken and went on. Oduduwa sprinkled the soil from the tree over the water on Earth, and dropped the chicken onto the soil.

As the chicken ran around he spread the soil, until everywhere there was land. When Obatala awoke, he was upset to find that Oduduwa had performed the task he had been charged with. But God gave him another task—to populate the earth.

Many traces of these African folk tales can be found in the folk tales told by African Americans in past centuries.

African folk tales were one way in which Africans preserved their culture and honored their identity while in a foreign land. 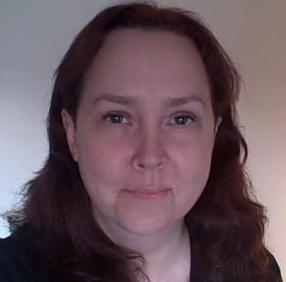 Caroline Ryan is the author of An Old Castle Standing on a Ford: One Yank’s Life in an Almost Peaceful Belfast (Eloquent Books), a nonfiction narrative about life in Belfast after the Troubles. She writes often about intercultural issues.

Martin, Philip. “The Chief Who Was No Fool.” Folk Tales Collected by Philip Martin, 1990. http://www.phillipmartin.info/liberia/text_folktales_chief.htm.

“The Dog Hides His Mother.”  All Folk Tales, 2009. http://www.allfolktales.com/wafrica/dog_hides_his_mother.php.

“The Creation of the World: A Yoruba Myth.” All Folk Tales, 2009. http://www.allfolktales.com/wafrica/yoruba_creation.php.