Education reform will require both real resources and real reform.

Education reform also provides an opportunity for real innovation and real progress on all our parts.

Northridge Middle School of Crawfordsville, IN – Mass Media students put together a public service announcement about what might happen if budget shortfalls continue due to education reforms and property tax caps.

Education reform will require a closer look at how our schools are funded.

Public school funding in the United States comes from federal, state, and local sources, but because nearly half of those funds come from local property taxes, the system generates large funding differences between wealthy and impoverished communities.

Such differences exist among states, among school districts within each state, and even among schools within specific districts.

Funding differences in the United States generate huge disparities in the quality of school buildings, facilities, curriculum, equipment for instruction, teacher experience and qualifications, class sizes, presence of auxiliary professionals, and other resources.

It would surprise most U.S. citizens to learn that disparities such as these are simply not tolerated in other developed countries, where public schools normally receive equal funding in rich and poor communities alike on the basis of the number of students enrolled.

Poor and minority children always face problems that are not experienced by their peers, and in all advanced nations they tend to have more difficulties with education. But in the United States, those children face additional handicaps because they are often forced to attend poorly funded schools.

Economists at the Center for American Progress announced an online interactive website that looks at the Return on Educational Investment by comparing the productivity of 9,000 United States school districts.

By productivity, they mean how much learning a district produces for every dollar spent, after controlling for factors such as cost of living and students in poverty. 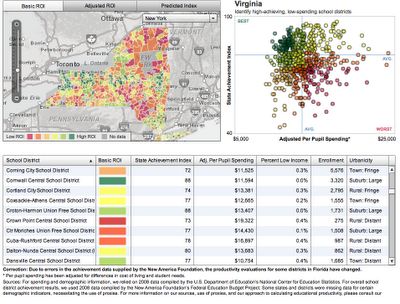 Use the interactive map to see how each district performs and click on the tabs to toggle between the three different approaches called Basic ROI, Adjusted ROI, and Predicted Index.

This report is the culmination of a yearlong effort to study the efficiency of the nation’s public education system and includes the first-ever attempt to evaluate the productivity of almost every major school district in the country.

While some education leaders have taken steps to promote better educational efficiency, most states and districts have not done nearly enough to measure or produce the productivity gains our education system so desperately needs.

Some fear that education reform that focuses on efficiency might inspire policymakers to reduce already limited education budgets and further increase the inequitable distribution of school dollars.

To be sure, our nation’s system of financing schools is unfair.  Low-income and minority students are far more likely to attend schools that don’t receive their fair share of federal, state, and local dollars.

But while the issue of fairness must be central to any conversation about education reform and education finance, efficiency should not be sacrificed on the altar of equity.

Our nation must address education reform so that it is productive, efficient, and funded fairly.

I think we can all agree that the students of our great nation deserve an equal opportunity to succeed.