At the age of 27, Farrah Gray has achieved more than most people achieve in a lifetime.

In celebration of Black History Month, this impressive story of achievement and trailblazing by young, bestselling author Farrah Gray is one that is sure to inspire readers of all ages.

Raised in the impoverished south side of Chicago, Dr. Farrah Gray defied the odds and became history’s youngest self-made millionaire, beyond the field of entertainment, by age fourteen.

He was also the youngest person to have an office on Wall Street and the youngest to receive an honorary doctorate. Now he is an inspiration to millions and an international bestselling author. 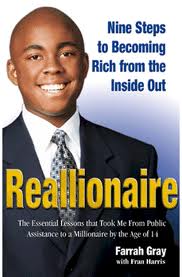 Farrah Gray authored, Reallionaire, Get Real Get Rich, and The Truth Shall Make You Rich. The books have been translated into Russian, Korean, Indonesian and Vietnamese, with book sales in Africa, Australia, Europe, and Central and South America.

Chair of the Farrah Gray Foundation and spokesman for the National Coalition for Homeless, as well as the National Bone Marrow Donor Program, he has been invited to the White House eight times; first with Presidents Clinton and Bush and most recently with President Barack Obama.

Gray began his entrepreneurial, personal, and civic development as a stellar young citizen at the age of six, selling homemade body lotion and his own hand-painted rocks as bookends, door-to-door.

NE2W enlisted, educated, and engaged “at-risk” youth by creating and developing legal ways for them to acquire additional income.

As a pre-teen, Farrah Gray reached twelve million listeners and viewers every Saturday night as co-host of “Backstage Live,” a syndicated television and radio simulcast in Las Vegas. 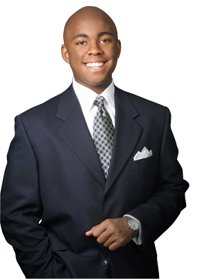 His sense of social responsibility motivated him to create the non-profit organization, the Farrah Gray Foundation.

Among other programs and initiatives, his foundation focuses on inner city, community-based entrepreneurship education and provides scholarship and grant assistance for students from at-risk backgrounds to attend HBCU’s (Historically Black Colleges and Universities).

Gray donates his honorariums from speaking engagements (which can be upwards of $15,000) and the proceeds of his book to his foundation in what he refers to as his “self-imposed” youth tax.

The Farrah Gray Foundation is also in partnership with the Kauffman Foundation, launching entrepreneurship programs in inner-city schools across the country.

Gray is currently the CEO of Farrah Gray Publishing (FGP) which is distributed by HCI Books – publishers of the world famous New York Times, USA Today, and Guinness Book of World Records, as well as the best-selling Chicken Soup for the Soul series.

This series was translated into more than forty languages and sold more than 112 million copies, with total retail sales of Chicken Soup for the Soul branded merchandise topping $1.3 billion.

Pat encourages you to visit  www.FarrahGray.com for more information and inspiration to succeed!