How Seven Simple Words Can Save A Conversation Gone Wrong

When a meeting or conversation gets off to a rocky start—whether tense words are exchanged or you just don’t seem to be connecting—it’s time to push the reset button.

Has this ever happened to you? You’re talking to a client, or perhaps your boss, and you realize the conversation has gotten off on absolutely the wrong foot.

You may have learned new and unexpected information from the other person that renders everything you’ve said irrelevant.

You may have walked in to the conversation with an assumption that was just not true.

Or, you find you’re not connecting, and tension and anger start to creep into the exchange.

It really doesn’t matter. What does matter is that a potentially productive conversation has become awkward and stilted—or even worse, superheated and combative.

You have three options when the conversation goes wrong:

Do you mind if we start over?

This question is the Saint Bernard rescue dog that brings a warming barrel of brandy into the conversational arctic.

People are forgiving. They want things to go well, and this question disarms them and eases the way to a new beginning. 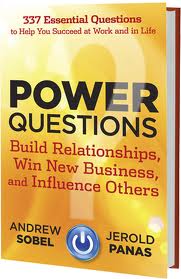 This question is only one of the many the authors include in their book, Power Questions. They explore dozens of questions that light fires under people, challenge their assumptions, help them see problems in productive new ways, and inspire them to bare their souls (which, of course, strengthens the bonds in the relationship).  And they wrap up the book with an exhaustive list of additional questions—bringing the grand total to 337 power questions to help readers succeed at work and in life.

Back to “starting over”: my coauthor recalls the time he walked into the office of a wealthy benefactor named Allan to ask for a million-dollar donation to his alma mater’s College of Engineering.

Though he knew better, Panas failed to gain rapport and explore Allan’s true interests before jumping in with the big request. When he was severely rebuked for his presumptuousness, Panas realized he had made a serious error and dug himself into a deep hole.

He got up and excused himself, left the room, and 10 seconds later knocked on the door and asked the power question, Do you mind if we start over?

Allan smiled and invited Panas to sit down. Start over they did, and after approaching the revived conversation the right way, Panas discovered that Allan was interested in making a major gift—but to the University’s theater program, not its engineering program!

Try it yourself. The next time a conversation gets off on the wrong foot or veers off track, reset with this powerful question.

Here are more pointers for saving a valuable relationship:

Take responsibility for the conversation’s derailment. You might say something like “I’ve gotten off on the wrong foot and I’m really sorry. Do you mind if I begin again? I haven’t done this justice.” Or, “The reason I’d like to start over is that I put my foot in my mouth. Can I give it a second try?”

Try: “Can we step back from this? Whatshould we be talking about?”

“Actually, even if the other party made the initial faux pas, it’s still okay to say you’re sorry the conversation went awry,” notes Sobel. “You’re not taking blame; you’re just acknowledging regret that things took a bad turn and that the other person is upset.”

It goes a long way toward smoothing any ruffled feathers.

“More than words alone, a genuine smile that reaches the eyes can evoke a powerful visceral response,” says Sobel. “It shows that your intentions are pure, and when people realize that, the vast majority are willing to give you another chance.”

You don’t have to actually leave the room and come back in, like Sobel’s coauthor did, but draw a sharp dividing line between the bad conversation and the new one.

A good way to reset is to ask the other person a question and draw them back into the conversation as an active participant. It could be something as simple as “Can I ask—how have you been thinking about this?” or “Let’s step back for a second—can you share your view of the situation?”

Of course, starting over isn’t just for the workplace. It can work just as well to defuse a budding argument with your spouse or any family member or friend.

“It’s a bold, gutsy move to restart a conversation from scratch.”

Yes, it feels awkward. Most of us are not accustomed to swallowing our pride, admitting in real time that we screwed up, and asking if we can make it right.

But the next time a conversation goes wrong, try it.

Not only will it salvage the moment, it will pave the way for a more authentic and productive conversation and relationship in the future.

Andrew Sobel is the most widely published author in the world on client loyalty and the capabilities required to build trusted business relationships.

His first book, the bestselling Clients for Life, defined an entire genre of business literature about client loyalty. His other books include Making Rain and the award-winning All for One: 10 Strategies for Building Trusted Client Partnerships.

Andrew can be reached at AndrewSobel.com.

Read more articles on how to build better relationship…