How To Make Soul Food Healthier

If you have not yet made it to the Southern part of the United States to enjoy some soul food – homemade barbecued chicken, cornbread, mac and cheese and collard greens, then you should definitely put this on your bucket list.

However, having lived in Atlanta, Georgia for four years, I know first-hand that soul food has gotten a massive amount of bad press, and for good reason.

This is because soul food has slowly morphed into greasy, sodium-laden, calorie-rich, super-size-portioned meals that are major contributors to the increase in obesity rates, hypertension, diabetes and cancer among African Americans.

Soul food traces its root back to Africa, during the slave trade of the early 15th century.

European enslavers used to feed their slave workers as cheaply as possible (mostly with leftover meals from the plantation).

This forced the slaves to grow their own crops, which mostly consisted of healthy vegetables such as turnips, beets, and dandelions. The slave diet soon expanded to other types of greens such as collards, kale, pokeweed, cress, and mustard.

The soul food that was traditionally prepared by slaves, was very high in starch, sodium, fat, and calories, because it fueled the slaves with enough energy that helped them endure their grueling physical labors.

Also, another important nature of the slavery-era soul food, involved reusing the cooking lard, because many cooks were unable to afford new oil each time they cooked.

Unfortunately, at the exception of a few tidbits, modern-day soul food has kept much of the unhealthy elements of its ancestors. So if you want to keep the “soul” in soul food without sacrificing your health, here are a few simple steps you can take to make things healthier.

Trim the Fat Down

Traditional soul food meats are often the main culprit for the health ailments mentioned above. Bacon, fat back, ham, hock and sausage, are dangerously jam-packed with calories, fat, and other unhealthy contents.

Next time you cook soul food, replace these meats with healthier alternatives such as smoked turkey, turkey bacon or Canadian bacon. Also, substitute the lard or butter for extra virgin olive oil or canola oil for example.

Choosing healthier oils and meats will dramatically bring down the calories and fat, and improve your health as a result.

Salt is one of the most common seasoning ingredients used in the preparation of soul food. Unfortunately, the salt if often abused.

Reduce the salt, and supplement it with healthier herbs and spices such as pepper, oregano, basil, and thyme, which are also as flavorful as salt. This would help reduce the sodium content of your meal.

White flour is another major component of soul food, sharing an intricate part of baked and fried goods. One way of making your soul food healthier, is by swapping white flour for whole wheat flour wherever possible.

This will ensure your meal is more nutritious. To top it off, you will not notice any difference in taste, as white flour and whole grain flour taste the same.

Since soul food is often consumed during special occasions such as Thanksgiving, Christmas, weddings, etc, plates tend to be piled up with food, as granny wants everyone to feast on her wide selection of delicious dishes.

Not to mention, these special occasions make for perfect excuses to overindulge in high calorie high fat dishes. To avoid packing on the pounds each time you celebrate a special event, choose a small plate, and don’t serve yourself portions that threaten to spill over your small plate. This habit will carry you a long way.

Soul food should not be synonymous of unhealthy food. At a time when obesity, hypertension, diabetes, and cancer are rampant within the African American community, it is timelier than ever, that we pay closer attention to the quality of the food we put in our body. 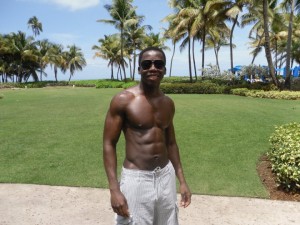 Kodjo Hounnake is a home fitness enthusiast who loves blogging about healthy lifestyles.