How Your Parenting Style Affects Your Child’s Behavior

Authoritarian parents whose parenting style can be summed up as “it’s my way or the highway” are more likely to raise disrespectful, delinquent children who do not see them as legitimate authority figures.

“When children consider their parents to be legitimate authority figures, they trust the parent and feel they have an obligation to do what their parents tell them to do.

This is an important attribute for any parenting style, as the parent does not have to rely on a system of rewards and punishments to control behavior, and the child is more likely to follow the rules when the parent is not physically present,” said Rick Trinkner, a doctoral candidate at UNH and the lead researcher.

This is the first study to look at whether the parenting style influences adolescents’ beliefs about the legitimacy of parent authority and if those perceptions affect delinquent behavior.

The results are presented in the February issue of the Journal of Adolescence in the article “Don’t trust anyone over 30: Parental legitimacy as a mediator between parenting style and changes in delinquent behavior over time.”

Analyses reported are based on data collected over an 18-month period beginning in the fall of 2007. 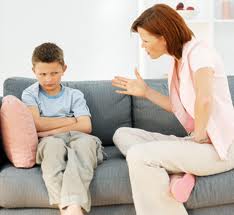 Our results showed that parental legitimacy was an important mechanism by which parenting styles affected adolescent behavior,” Trinkner said.

Authoritative parents are both demanding and controlling, but they are also warm and receptive to their children’s needs.

Children of the authoritative parenting style tend to be self-reliant, self-controlled, and content.

On the other hand, authoritarian parents are demanding and highly controlling, but detached and unreceptive to their children’s needs.

These parents support unilateral communication where they establish rules without explanation and expect them to be obeyed without complaint or question.

The authoritarian parenting style produces children who are discontent, withdrawn, and distrustful.

Finally, in contrast to authoritarian parenting, permissive parents are non-demanding and non-controlling. They tend to be warm and receptive to their children’s needs, but place few boundaries on their children.

If they do establish rules, they rarely enforce them to any great extent. These parents tend to produce children who are the least self-reliant, explorative, and self-controlled out of all the parenting styles.

“The parenting style used to rear their children had a direct influence on whether those children perceived their parents as legitimate authorityfigures.

Adolescents who perceived parents as legitimate were then less likely to engage in delinquent behavior.

Thus, the authoritative parenting style may be more effective than the other styles because this style makes adolescents more willing to accept their parents’ attempts to socialize them and subsequently follow their rules,” Trinkner said.

“Conversely, the authoritarian parenting style has the opposite effect in that they actually reduce the likelihood of their children perceiving their authority as legitimate.

Adolescents from authoritarian parents are more likely to resist their parents’ attempts at socialization,” he said.

While the children of permissive parents were less likely to respect their parents as authority figures, the researchers found they were no more or no less likely to engage in delinquent behavior.

According to the researchers, the results show that fostering and creating parental legitimacy is one technique for parents to exert control over their children.

Additionally, parents are more likely to be viewed as legitimate authorities if they utilize authoritative parenting practices rather than authoritarian or permissive practices, which tend to undermine parental authority.

“Our data offer further evidence that the authoritative parenting style is an effective way for parents to successfully socialize their children and that its influence works largely through its effect on youth perceptions of parental legitimacy,” Trinkner said.

The University of New Hampshire, founded in 1866, is a world-class public research university with the feel of a New England liberal arts college.