Is There A Role For Texting In Education?

The impact of texting on the decline of formal writing among teens has been debated in pedagogical circles ever since cell-phone ownership became an adolescent rite of passage in the mid-2000s.

But according to a University of Illinois expert in media literacy, not only are critics who argue that text messaging is synonymous with literary degradation wrong, they also often overlook the bigger role that texting and its distant cousin, “tweeting,” could play in education and research.

Carol L. Tilley, a professor of library and information science at Illinois, says that schools and libraries should consider embracing texting in education as a means of engagement rather than simply outlawing it.

“I think if you’re an educator or librarian looking for new ways of to reach out to teens and tweens, then texting is one possibility,” Tilley said. “Over 70 percent of teens have a cell phone, so I think it’s a viable alternate means of engaging with that age group.”

When used as a tool for ubiquitous learning, texting wouldn’t be a tool of distraction, but a means of engagement for this generation of gadget-obsessed teens.

“Teachers could send reminders about assignments, links to study guides or updates on their progress grading major projects by texting or by tweeting,” Tilley said. “If they’re away at a conference or need to use a sub for a day, they could use Twitter to stay in contact with their class without having to physically be there.”

Students could text reference questions to school librarians without having to ask for a hall pass or having to wait until lunch, Tilley said, and librarians might tweet about new materials added to their collections.

Texting could be seen as continuing the tradition of play and economy in language, which Tilley argues is good preparation for more formal writing assignments — provided, of course, that the use of emoticons and text-speak don’t spill over into their final drafts.

“Young people learn about the importance not only of argumentation but also how to deliver a certain message to an audience, especially given the limitations of the medium itself,” she said. “From an educational standpoint, that helps students become more in tune with language.”

Tilley said that Twitter, the popular micro-blogging site that lets users tweet text-based messages that can’t run longer than 140 characters, is actually easier to integrate into instruction than text messaging because “you can broadcast tweets to a wider audience than texts.”

“In terms of strategies for creative or critical writing, having a limited number of characters to work with opens up all sorts of cool ways to play with the medium,” she said.

For example, an English teacher could take a famous character from a novel and ask students to tweet from that character’s perspective. “It’s a good way to get into the psychology of the character,” she said. 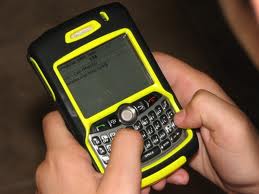 Teachers could also challenge students to craft micro-stories complete with a climax and a denouement in 140 characters. Tilley noted that the flash-fiction genre has a distinguished lineage: the famously laconic Ernest Hemingway once wrote a story using just six words — “For sale: baby shoes, never worn” — and is said to have called it his best work.

Tilley argues that most educators make the faulty assumption that texting and  tweeting are akin to formal writing.

According to a recent Pew survey, teens view texting not as writing or as a distraction from “real” communication, but on par with informal conversation.

“People have always spoken informally in short-hand codes,” she said. “With texting, you’re using your thumbs to tap out letters on a device you ordinarily use to talk to someone else with. So it’s obviously more conversation than formal correspondence, especially since it allows for that almost instantaneous back-and-forth volley of messages.”

Since texting can be thought of as closer to a dialogue than a formal piece of prose, Tilley said you can’t expect the same level of polish and grammatical correctness to texts or tweets.

“Texting is also dependent on context, interpersonal dynamics and how you construct your messages, rather than the actual content, in some cases.”

In their efforts to turn cell phones into contraband, Tilley said that teachers and librarians might be fighting a losing battle.

“Texting can be a lot more surreptitious than an actual phone call, where you have to hold the phone up and speak into the receiver,” Tilley said. “So just because you can’t have cell phones in a lot of schools and libraries doesn’t mean students won’t try to text on the sly.”

Despite the pervasiveness of cell phones among teens, Tilley said the statistics are mixed as to whether adolescents are actually using Twitter. One of the reasons could be a lack of access to a computer.

“I see an increase in the number of teachers who expect word processed assignments even though they may not provide in-class time for students to use a computer,” she said. “If a student doesn’t own a computer, where are they going to go? They may be able to go to the public library, but there’s often a wait and then a time limit for computer usage.”

Although teachers and librarians have to be aware of the varying levels of access that students have to technology, Tilley said educators should also proactively seek new avenues of access for those vulnerable populations.

“If teachers and librarians can help students be a part of that social context, students will benefit because it keeps the digital divide from widening even further,” she said.

But there’s also the “cool” factor to consider: By the time teachers get around to bringing something new into the classroom, it’s already passé.

“There’s always that danger when embracing something in a school setting that you kill it for the students,” Tilley said. “But helping kids understand the social and contextual role that texting plays in their lives I think is one possible justification. If there are ways educators can incorporate texting in providing homework support or building dialogue out of school hours, then I think it could be a useful communications tool.”

Carol L. Tilley, a professor of library and information science at Illinois,

Read more on teens and texting…