Is Your Child Addicted To Caffeine?

No one questions the little perk that a morning shot of caffeine provides.

Many of us wake up in the morning with only one thought on our mind….coffee!

In fact, research supports many positives for caffeine use, including an improvement in long-term memory and faster learning.

But the research uses moderate amounts of caffeine and it doesn’t take into consideration the problems young nervous systems encounter with chronic caffeine use. 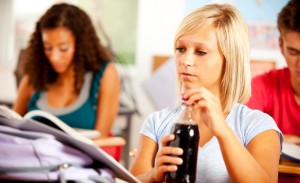 Caffeine mimics a neural chemical which our body produces naturally. Continuous use of caffeine will cause the body’s own system to quit making the neural chemical – after all, why bother producing it in the body, when you are providing it artificially.

This addiction to caffeine is now becoming more than just an adult problem. We see it moving into younger and younger populations via soft drink consumption which has increased dramatically in the last decade and a half.

The use of caffeine in kids causes a greater concern as the developing nervous system needs to learn how to produce and balance its own natural neural chemicals. Providing them artificially during this time causes confusion.

How much caffeine are American children getting?

Much of the increase we see in childhood consumption of caffeine must be blamed on the availability of the products in our schools.

At some point during the last 10 years many of our public schools began to actually depend upon soft drink sales as a major source of funding.

To the concerns of caffeine use on the developing nervous system, we can now add the National Institute of Health’s statement blaming America’s obesity on increased soft drink consumption and the new research now linking the high phosphorus content of soft drinks with robbing our bones of calcium – of particular concern to young females.

Who is protecting our children?

We are the nation’s educators. If we don’t take a stand, who will?

Developer of the Layered Curriculum® method of instruction, Dr. Nunley has authored several books and articles on teaching in mixed-ability classrooms and other problems facing today’s teachers.

Full references and additional teaching and parental tips are available at: Help4Teachers.com

More articles related to the addiction of caffeine…