A Vision For A More Responsive Public Education System

Our public education system has proven over the past century that they are quite adept at resisting change.

The following article courtesy of Education Next – Putting the Schools in Charge.

It’s no surprise that, 28 years after the publication of A Nation at Risk, school-reform efforts have generated so little effect on public education.

Recent attempts to inject accountability and innovation in the public education school system have brought us to an important opportunity.

No Child Left Behind helped add transparency, and Race to the Top (RttT) motivated states to rethink teacher evaluation, charter limits, and more.

The Investing in Innovation fund (i3) has seeded some promising innovations and helped attract more private investment to public education.

But none of these initiatives hits at the reasons that public education has proven itself so innovation-resistant: governance and compensation.

Further, there is good reason to believe a third impediment—the absence of useful data—will persist even through the Common Core State Standards initiatives.

Finland serves as a model for many reformers. There is a single curriculum; teachers are well educated and well respected.

Their public education system reflects Finnish ideals and builds on Finnish strengths, and their students score at the top of international tests like PISA (Program for International Student Assessment) and TIMSS (Trends in International Mathematics and Science Study).

But a top-down system will continue to be the wrong approach in this country, whether on a national or state level.  It doesn’t reflect American values or culture, nor does it address the size, diversity, or income differences of the United States.

(Finland has half as many students as New York City, and only 13 percent live in poverty.) In a country of 300 million people, a top-down approach makes substantive change virtually impossible. 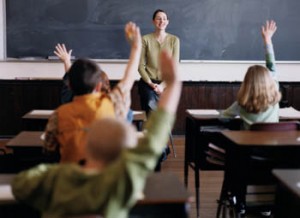 To fix our public education schools, states have to stop trying to fix them; the quickest way to raise performance is command and control, but over the long run martial law does not even work well for generals.

States can create a more agile, more American, system of governance that eliminates impediments to improvement, empowers public education schools to innovate, and uses data to help families find the right schools for their children. The federal government should encourage them to do so.

None of the proposals below address the role of profitmaking companies in K?12 education (though my bias might be clear, as I have run education companies for 30 years).

It is important not to conflate marketplace with for-profit. It is also important to recognize that it takes time for deregulation and a newly formed marketplace to work.

The breakup of AT&T and the telecommunications bill of 1986 did little to help consumers in the very short term, but they cleared the path for lower costs and technologies including the Internet and the cellphone.

Occasionally efforts to create a marketplace don’t work at all, as happened with banking deregulation.

As public education is a public good and requires public funding, proposed structures should be measured by the incentives they will create for schools, districts, and teachers to produce great student outcomes at reasonable expense.

Although our ultimate goal is a system of schooling that naturally evolves and improves, it’s important to keep in mind that…  CONTINUE READING  this article by John Katzman courtesy of Education Next.

Read more articles related to the topic of digital textbooks…