Alzheimer’s disease, the most common form of dementia, affects approximately 5.3 million Americans and is the seventh leading cause of death in the United States.

According to the Alzheimer’s Association, by the year 2030 as many as 7.7 million Americans will be living with Alzheimer’s disease if no effective prevention strategy or cure is found.

By 2050 the number is projected to skyrocket to between 11 million and 16 million. Ten million baby boomers are expected to develop the disease. 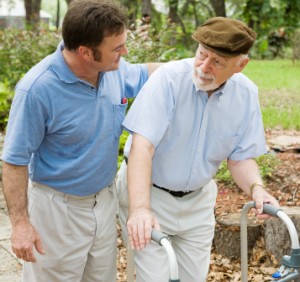 A new study has determined a marker of Alzheimer’s disease can predict how rapidly a patient’s memory and other mental abilities will decline after the disorder is diagnosed, researchers at Washington University School of Medicine in St. Louis have found.

In 60 patients with early Alzheimer’s disease, higher levels of the marker, visinin-like protein 1 (VILIP-1), in the spinal fluid were linked to a more rapid mental decline in the years that followed.

Scientists need to confirm the results in larger studies, but the new data suggest that VILIP-1 potentially may be a better predictor of Alzheimer’s progression than other markers.

“VILIP-1 appears to be a strong indicator of ongoing injury to brain cells as a result of Alzheimer’s disease,” says lead author Rawan Tarawneh, MD, now an assistant professor of neurology at the University of Jordan.

“That could be very useful in predicting the course of Alzheimer’s and in evaluating new treatments in clinical trials.”

VILIP-1 was originally identified as a potential indicator of brain cell damage in the laboratory of Jack Ladenson, PhD, the Oree M. Carroll and Lillian B. Ladenson Professor of Clinical Chemistry in Pathology and Immunology at Washington University.

Scientists think VILIP-1 serves as a calcium sensor in brain cells. It is released into the cerebrospinal fluid when the cells are injured.

Tarawneh is a former postdoctoral research associate in the laboratory of David Holtzman, MD, the Andrew B. and Gretchen P. Jones Professor and head of Washington University’s Department of Neurology.

In an earlier study, she and her colleagues showed that healthy subjects with high levels of VILIP-1 were more likely to develop cognitive impairment and Alzheimer’s disease over a two- to three-year follow-up period.

At the outset, researchers measured levels of VILIP-1 in patients’ spinal fluid and assessed their mental abilities using an extensive battery of tests. The cognitive function testing was repeated annually.

“Memory and other mental abilities declined faster in patients with the highest levels of VILIP-1,” Tarawneh says. “In patients with early symptoms of Alzheimer’s disease, VILIP-1 seems to be at least as good as — and potentially even better than — the other prognostic indicators we used in the study.”

In contrast, VILIP-1 appears to reveal how much damage to brain cells has occurred as a result of brain changes caused by Alzheimer’s.

“These results are intriguing, but we need a larger study to fully understand how the insights provided by VILIP-1 compare to those we can gain from other markers,” Tarawneh says.

She is working with Washington University scientists to standardize the tests that measure VILIP-1 for expanded use in research.

The above story is presented in part from materials provided by Washington University in St. Louis.