Bullying and school violence continues to be in the news headlines across the nation.

A 17 year-old alleged gunman, T. J. Lane, opened fire in the school cafeteria at Chardon High School in Ohio on 2/27/2012.  At 9 A.M. the shooter had been detained after fleeing on foot a short distance from the school.

Three wonderful young people had their lives cut short and 3 were wounded.

While each school shooting sends a wave of shock through the community and heightens the anxiety in each family home, the details surrounding each shooter in recent history have become disturbingly similar. 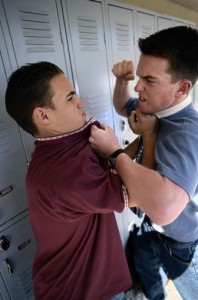 Of  the few statements released from current Chardon students, Lane was described as, “an outcast who felt bullied” with another student claiming the shooter had posted on the social media site Twitter, making some type of threat, which the student had not taken seriously.  His facebook page was described by CNN as disturbing.

His parents had allegedly also engaged in domestic violence in the past.  In general, parents set the model for how to solve problems and the model in this home was violent.  Therefore, T. J. learned to solve his problems through violence.

T. J. was similar to other infamous gunmen around the country in some ways.  A study of school shooters found that many felt slighted and treated unjustly by society. These sentiments often stem from interactions with those in their home life, school, community, or others that have bullied them.

Bullying and school violence is often a result of a youth’s differences in looks, behavior, or social status of which other children make fun.

Most school shooters in the past have felt bullied or rejected by their peers and this young man appears to be no exception.

In the case of violence, aggression is used against the victim, who then becomes a bully.

This is not uncommon and is a defense strategy.  This happens when no adult steps in to solve the problem appropriately.  Teens then use what they know to try to solve their problems.

A study by the Secret Service identified characteristics that school shooters appeared to have in common.  They plan, acquire weapons and take a very public path leading up to the shooting.  They feel rejected by peers, but have some friends that often know of their plans.  With only 2 exceptions, all school shooters have been male.

These students are often described as keeping to themselves, but having a habit of confiding their plans to a select few friends.  Many times these plans will be conveyed in a fleeting statement to a close friend, but the potential shooter has usually already gone through meticulous plans of acquiring firearms and a list of people they feel have wronged them in the past.

To ensure the most efficient prevention plans for school violence, students and teachers alike need to understand that bullying needs to end in schools and threats of violence are to be taken seriously.

Consequently, bullying and school violence remains a prevalent threat in school districts all over the country and can single-handedly uproot the peace of mind in communities.

While the anxiety can be overwhelming at the time of a shooting, it is critical that parents, teachers, and administrators be well-versed in picking up on the signs of a student contemplating these violent behaviors.

In my own experience dealing with bullying and school violence, many of these students come from a fractured family background, making personal attachment very difficult and creating an overall sense of distrust in the child’s life.

These people tend to have a “me against the world” mentality whereby those in their community are perceived to be the enemy.  As their sense of self-worth dwindles, they feel they must prove their own strength, and that eventual imprisonment or suicide is better than their current state.

To counteract bullying and school violence, it is important that members of society encourage teens to seek necessary therapy. There are appropriate psychological assessments that can unveil the roots of their problems, whether it is prior trauma, poor attachment, or deficiencies in brain growth.

So often their lives can be made better by therapists that are able to frame their problems in a different way and teach skills to solve problems in a better way.

Teachers that become well-versed in picking up on these subtleties that lead to bullying and school violence can help shift the current trends of violence in our schools, and give students the necessary outlets to voice their problems and to get help for them.

One very reasonably priced school wide program to help prevent bullying and school violence can be found at YellowRibbon.org.  In this very straightforward program, youth are taught the signs of potential violence and suicide and that “It is OK to ask for help.”

Dr. Kathryn Seifert has had over 30 years experience in mental health, addictions, and criminal justice work.

She founded Eastern Shore Psychological Services, a multidisciplinary private practice that specializes in working with high-risk youth and their families.

She writes and lectures nationally and internationally on the topics of bullying and school violence, violence, risk assessment, sex offenders, suicide prevention, school based mental health programs, and stress management.

Visit her site DrKathySeifert.com for more information on bullying and school violence.