The state-by-state races give teachers and students an opportunity to hold lively classroom discussions about politics — the difference between a primary and a caucus, for example, or the breakdown of delegate math.

“I know with at least my fifth graders, they know all of the candidates,” said Luciano Dorazio, who teaches social studies to kindergarten through fifth grade students at P.S. 150 Charles James Fox school in the South Bronx.

He said he uses Time Magazine for Kids in his classes to help encourage lively classroom discussions, since the magazine provides age-appropriate coverage of the elections.

Dorazio said he has been impressed by the lively classroom discussions.

Students are participating in lively classroom discussions and forming opinions about candidates and the issues based on their own experiences.

“I asked a kid why he was supporting Mitt Romney,” said Mr. Dorazio. “He said, ‘The same people that were trying to find jobs in my building are still finding jobs now. It shouldn’t take two or three years to find a job in this country.’”

Denise Clarke, a special education teacher who works independently with children at home, has developed a curriculum with her 16-year-old student that focuses on the primary elections. 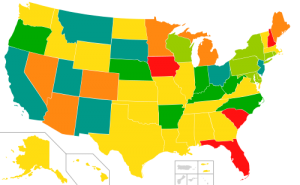 “We have a map of who’s winning each primary by state, so we’ve given everyone a color,” said Ms. Clarke. She and her student then color in the map according to which candidate won and tally up the delegates for each candidate.

“Eventually, I will incorporate exercises to help her understand the differences of opinions between the candidates and between the democratic platform and the republican platform, which will help her form her own political sense,” she said.

Mr. Packer, the applied civics teacher at Democracy Prep Charter School in central Harlem, said the primaries have sparked even more lively classroom discussions, sometimes echoing how the candidates themselves spar during the debates.

Civic engagement is a central component of the Democracy Prep charter network, Mr. Packer said, and the election has provided many lessons for students to learn the importance of voting.

Students in all grades hold mock elections, he said. But, students are only allowed to participate if they mock register–and only if they register correctly on a mock registration form.

On Tuesday–Super Tuesday, that is– 10 more states will hold primary elections.

Primaries provide much fodder for lively classroom discussions and are an excellent opportunity to sort out the delegate math.

Thank you to Yasmeen Khan, producer at WNYC for the information provided in this article.