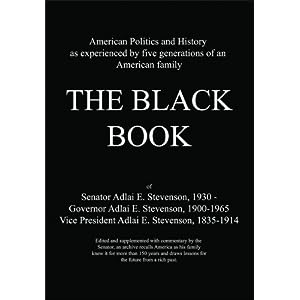 The book is named after a loose-leaf binder Adlai E. Stevenson I started as a means of collecting stories, sayings and aphorisms gathered throughout his life, beginning as a county prosecutor and rising to Vice-President of the United States under Grover Cleveland.

Jotted on a napkin, card – whatever was at hand – if worth keeping it went in the binder which became known as the black book. His son, Lewis Stevenson, Illinois Secretary of State contributed little to the black book.

His grandson, Adlai II, known to friends and family as ‘The Guv,’ expanded the black book during his years as an official in the Roosevelt and Truman Administrations, Governor of Illinois, Democratic presidential candidate and U.S. Ambassador to the U.N. during the Kennedy and Johnson Administrations.

Adlai E. Stevenson III inherited the black book stuffed with the Guv’s and Adlai I’s bits of wit and wisdom and contributions from friends and supporters the world over as word of the black book spread.

The black book was continuously edited and organized as a ready source of jokes, anecdotes, clichés, wisdom and inspiration for speeches and now it aims to restore American values to American politics

He augmented it from his life as a Marine, Illinois Supreme Court law clerk, partner in a large law firm, State Representative, State Treasurer, U.S. Senator, two-time Democratic candidate for Illinois Governor, farmer, international investment banker – and ever the hereditary global sojourner and public policy activist.
Probably no American family has been as actively involved in public office and politics for as long as the Stevensons, starting with Jesse Fell in the 1840’s who was Abraham Lincoln’s sponsor, and including Vice President Adlai Stevenson I, Governor Adlai II and U.S. Senator Adlai III.

The Black Book by Adlai III records American politics and history as these men knew it from on the ground and in the world.

The perspective is from no ivory tower. It is a record of lessons from the past on finance and economics, law and justice, the media, crime and justice, politics, speeches, religion, education, diplomacy and war – and more.

To restore American values to American politics and see the future, you must see the past – from the black book.

Rich in humor, The Black Book aims to help restore American values to American politics for generations largely cut off from a rich past and its lessons – lessons for today. It is a vast panorama of experience in politics and the world.

Great moments in recent history was not anticipated in The Black Book, including terrorism, unwinnable wars and unsustainable levels of debt. It ends in China with an Epilogue on the life cycles of nations and empires.

Stevenson observes that despite the metamorphosis of American politics, there are still many courageous and sensible men and women prepared to lay down their political lives for their country in an effort to restore American values to American politics.

He dedicates The Black Book to them with the hope they gain some “amusement, nourishment and strength from its bits of wisdom.”

Adlai E. Stevenson III has lectured widely, authored numerous articles and is the recipient of many honors, including Japan’s Order of the Sacred Treasure with Gold and Silver Star, and is an Honorary Professor of Renmin University in Beijing.

He is Chairman of the Adlai Stevenson Center on Democracy which aims to bring practitioners from the world together to address systemic challenges to democratic systems.

He is a graduate of Harvard College and Law School, maintains an office in Chicago and home with his wife, Nancy, on a farm near Galena, Illinois. They have two sons, two daughters, and five grandchildren.

For more information on The Black Book or Senator Stevenson, please visit: www.Adlai3.com.