117 marathons, 52 days, 32 pairs of shoes, 57 years old: Running On Empty is a fascinating glimpse inside the mind of an ultramarathon runner and the inspirational saga of his phenomenal journey running across America.

Marshall Ulrich climbed the highest mountains, set records in the toughest and longest footraces, and then clocked the third-fastest time ever recorded when he ran across America.

He credits his wife, Heather Ulrich, with the inspiration and support he needed to finish this unprecedented crossing at age 57.

Ulrich chronicled all of this in his book, Running on Empty, which debuts in paperback April 3, 2012.

His feats are impressive, legendary. At age 57, Marshall Ulrich went 3,063 miles on foot, running about 60 miles a day for 52 days straight, from San Francisco to New York City.

He was attempting to break a world record set by a man half his age and ultimately set two new records, completing the third fastest trans-American crossing in history.

You can imagine that being married to a guy so driven and prone to extremes requires a strength of its own, a special brand of emotional endurance. Ulrich’s wife not only puts up with this craziness but embraces it as an essential part of him. How? Why?

Running On Empty is not just a book about running. It’s about life.

Running On Empty is not just about the miles that Marshall physically ran, but also about the “miles” we all travel in life. 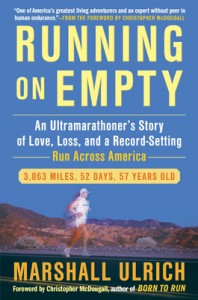 Ulrich wrote about all of this in Running on Empty: An Ultramarathoner’s Story of Love, Loss, and a Record-Setting Run Across America, now available in paperback.

A central element in the book is a recounting of how Ulrich met his wife, Heather, late in life and how she taught him to love again after great personal tragedy and previous marriages.

He credits her not only with helping him to become a better man, but also with being crucial to his completing this epic, record-setting transcontinental run.

Some “how to” tips for women in a relationship with a “crazy” man:

Running On Empty is both a gripping love story and an inspirational look into the lives of a couple who have experienced more than most people can comprehend – and who insist that everyone’s capable of much more than they may think.

While Running On Empty centers on the transcontinental run and the importance of and strain on the Ulrichs’ marriage, it also includes stories and lessons learned from Marshall Ulrich’s nearly three decades of athletic accomplishments in extreme endurance sports.

He began running ultra distances in his thirties just after his first wife died, and in his forties he set records on some of the world’s most difficult courses.

Ulrich won the infamous Death Valley Badwater Ultramarathon an unparalleled four times, has finished the race more times than anyone else, and he still holds the record for the original 146-mile course. (He’ll run it for the 18th time in July 2012 with Heather as his chief support.)

He started adventure racing while still in his forties; competing in multi-day events with a team of other hard-core athletes.

He’s one of only three people to compete in all nine Eco-Challenges, contests that make the TV show Survivor look like a resort vacation. At the same time, he became an innovator in the sport of ultrarunning, finishing feats of endurance no one had accomplished before.

In his 50s, he ascended all Seven Summits on first attempts, including reaching the peak of Mt. Everest in 2004. Yet the sight of Heather at base camp dwarfed the elation he’d felt at the top.

Outside magazine crowned him an “Endurance King,” Trail Runner named him one of the Legends of the Trail, and Adventure Sports highlighted him as an athlete “Over 50 and Kicking Your Butt.”

Four years later, in 2008, he completed the run across the United States with Heather by his side, acting as his crew chief.

He broke the Masters and Grand Masters records and outpaced all but two of his peers, both of whom were 20 years younger than Ulrich when they ran it.

Since then, Ulrich has continued to take on new challenges.

This summer, he plans to complete the first-ever circumnavigation of Death Valley National Park, going 800 miles on foot in one of the hottest places on earth.

Please visit www.MarshallUlrich.com for a closer look at the Ulrichs’ adventures and Running On Empty.