The Bridge From Book To Movie: Georgia Justice

Jackie Carpenter never thought she would be an author and especially one whose book The Bridge would be made into a movie!

But in 2008 that all changed when she was faced with an event no parent should have to go through – a tragedy so devastating she wasn’t sure she would be able to survive it. 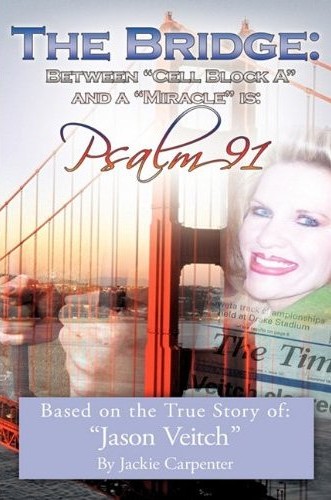 Jackie wrote The Bridge: Between Cell Block A and a Miracle is Psalm 91 to tell the story of how drastically her life changed the day her son apprehended thieves who had repeatedly been stealing copper from his work site.

On the advice of a deputy, he was armed and trying to keep the men on the premises until the police arrived when the gun accidentally fired, killing one of the men.

Up to this point, Jackie’s life had been picture perfect – a wonderful husband, good health, two married sons and four beautiful grandchildren.

But the day she received a frantic call from her son’s wife telling her he had been arrested for felony murder, the bottom fell out of her world.  In addition, her son faced four other serious charges and the deputy recanted the advice he had given him.

Jackie had clung to Psalm 91 throughout the trial, praying to God every day for a miracle.

She had even defied advice from her son’s attorney suggesting she not bring her Bible to the courtroom ‘lest she offend a juror.’

Knowing that God was the only one who could grant her a miracle, there was no way she would chance offending Him, so that Bible was with her every day of her ten-month journey through Hell to that glorious day in April 2009 when Jackie heard the jury’s verdict of ‘not guilty!’

While The Bridge tells the powerful story of a mother’s love and how she bridged the gap between Cell Block A and a miracle, the sequel Georgia Justice: A Story To Faith, tells the heart-rending story of the fear she felt when she realized her faith did not even begin to measure up to where it needed to be when tragedy struck.

It is a powerful testimony to the spiritual strength this small-town girl found in the promises of Psalm 91 and what she did to build up her faith during the agonizing time that led up to her son’s trial.

The Bridge is a book that Jackie hopes will be a resource for anyone facing a crisis in their life.

Jackie’s dramatic story is being made into a motion picture that will begin production next month.

Georgia Justice (by the producers of Courageous) starring Francine Locke, is scheduled to be released in the fall and depicts Jackie’s terrifying journey from the day her son was arrested to the day of his acquittal, and how her faith brought her to victory.

For more information on the movie please visit www.GeorgiaJusticeMovie.com.

Here are a few reviews of The Bridge:

Emory Daniels, Book Reviews: “The Bridge clearly demonstrates that God still performs miracles in the 21st century.  A key point is that when bad things happen it’s better to trust God than to blame Him. The story also reveals that it is certainly possible to survive a tragedy without losing faith.”

Monique, Book Pleasures: “This is a good, inspirational story…you can absolutely see the conviction in her (Jackie’s) heart that God’s love and grace alone brought her through this difficult time…she simply wants to share her miracle with you.”

Jackie Carpenter has been a featured guest on television, radio, and in newspaper articles. For more information on this author and her miraculous story of faith, hope and love, please visit her website at:www.BridgeToAMiracle.com