Tornadoes Are In Full Force As We Approach Spring 2012

Tornadoes continue to be both fascinating and deadly.

Tornado season has hit hard and early this year and forecasters are predicting a very active 2012 Spring Season.  Tornadoes cause an average of 70 fatalities every year in the U.S. And they’re incredibly tough to predict. 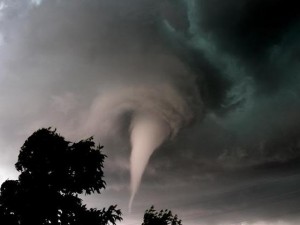 Tornadoes have been reported in every state, and though they generally occur during spring and summer, they can happen any time of the year.

There are no areas immune to tornadoes; they have been reported in mountains and valleys, over deserts and swamps, from the Gulf Coast into Canada, in Hawaii and even Alaska.

Over 1,000 tornadoes are reported annually nationwide, and as our tornado detection systems improve, more are being reported each year. However, sometimes tornadoes will develop in areas in which no tornado watch or warning is in effect, so stay alert for changing weather conditions.

Deadly tornadoes continue as a frightening reality in the U.S, especially throughout an area dubbed Tornado Alley and portions of other states. The threat of the wind-whipping funnels is most acute in May and June.

The mix happens most often in May and June, with April a close third, and a few other points throughout the year during shifting seasons, such as March and September.

For tornadoes to form, Brooks says a mixture of warm, moist air at low levels (strongest in the summer) must collide with dry, relatively cold air (most common in winter and spring).

Meanwhile, wind shear, the difference in the wind speeds near the surface and about 20,000 feet above ground, slams the contrasting conditions together. Wind shear is often strongest throughout late winter into early summer.

“Spring is when the ingredients are most likely to all be in place,” Brooks says. “Essentially, things are not at the peak moisture, peak cold air aloft or wind shear, but in the in between season when they’re all pretty good.” 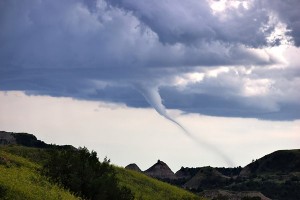 To pinpoint it even further, the most common time of day for this type of collision to cause tornadoes—is between 3 and 9 p.m., but that doesn’t restrict tornadoes from hitting at other times.

While southern states may peak sooner in the year than northern states, determining the severity of a tornado season is basically impossible, says Roger Edwards, a forecaster with the NOAA’s Storm Prediction Center.

Before the 1950s it was even illegal to forecast tornadoes, because of the uncertainty involved in the process and the panic a forecast could cause.

As weather data models, Doppler radar and hand-drawn analyses have become more intricate, forecasters can now at least give some warning of conditions that could potentially prove dangerous.

Forecasters are equipped with extremely accurate weather observing tools and systems but their growing challenge is not necessarily in predicting the weather. The challenge is in getting the public to respond to warnings and safety instructions.

While tornadoes can be highly destructive and are potentially deadly, timely precautions can save lives and reduce property damage.

During active weather, stay alert of the forecast by listening to radio or television or by using a NOAA Weather Radio.

Here’s what you should know:

A National Weather Service WATCH is a message indicating that conditions favor the occurrence of a certain type of hazardous weather. For example, a severe thunderstorm watch means that a severe thunderstorm is expected in the next six hours or so within an area approximately 120 to 150 miles wide and 300 to 400 miles long (36,000 to 60,000 square miles).

The NWS Storm Prediction Center issues such watches. Local NWS forecast offices issue other watches (flash flood, winter weather, etc.) 12 to 36 hours in advance of a possible hazardous-weather or flooding event. Each local forecast office usually covers a state or a portion of a state.

A National Weather Service WARNING indicates that a hazardous event is occurring or is imminent in about 30 minutes to an hour. Local NWS forecast offices issue warnings on a county-by-county basis.

Contact your local National Weather Service (NWS) office or emergency management agency for more information about the risk from tornadoes in your area.