What Is The Appropriate Age For Kids To Join Facebook?

Social media, and Facebook in particular, has been booming for years, making it increasingly more difficult to avoid in our everyday lives.

For parents, that can be a scary thought.

The ease with which social media sites like Facebook connects users has sparked conversation about new legislation.

The legislation is hoping to minimize the risk with safety mandates, and it’s frightening to think that even our children might be exposed to those dangers.

In light of this, SodaHead.com, the web’s largest opinion-based community, polled its users to find out the age that they thought kids should be able to join social media sites like Facebook.

The results were combined with some important external information. 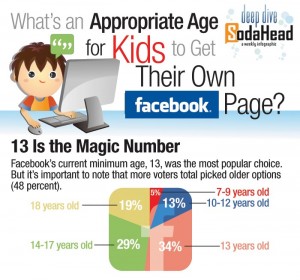 Hopefully this poll will paint a clearer picture for concerned parents, and offer insight into how other parents are dealing with the Facebook predicament.

Even though Facebook has a minimum age of 13 to sign up for an account, that has not stopped kids 12 and under from either signing up for their own Facebook page or having their parents do it for them.

Poll results indicate that while 34% of respondents believe that 13 is an appropriate age, 48% believe that Facebook users should be older than 13 years of age.

29% of voters think you should be between 14 – 17 before joining Facebook and 19% said that Facebook users should be 18 or older.

As expected, teen voters were much more likely to suggest that they should be allowed to sign up.

75% of respondents aged 13-17 said that they should be allowed to have a page by age 13, while the majority of all age groups with respondents over 18 feel that kids should be older than 13 before joining Facebook.

Additional results showed that 1/3 of parents think that kids should be 18 before signing up on social media sites, while only 13% of those without children thought users should have to wait until 18.

Portions of this article were provided by SodaHead.com