How To Improve Memorization Skills In 5 Steps

The NLC (Number-Letter Code) system of memorization can help you create a vast number of mnemonic “locations” to store your memory files for easy recall.

Here are five steps to get your started on improving your memorization skills:

1.  Clarify what material you need to memorize for your course or profession!

2.  I would also commit around one hour a day to the following two exercises, currently downloadable for free, to develop such key aspects of intelligence as short-term memory, concentration span, discernment and creativity:

(i) Harry Kahne The Multiple Mentality Course for cross-exercising underused parts of the brain. Several of the exercises involve play with verbal constructions you may be using from my book Memory Palace Definitive and can be practiced in one’s head during the more mindless parts of the day

(ii) Dual N-Back: seems to be the one brain training game that works

3.  Next, I would recommend the memory-improving sessions in Neuro Programmer 3 audio-visual software during home study.

Looking around the room you are in you may notice the following string of objects: aquarium, light, ceiling, and door.

Applying a number to each of these in turn:

This process gives us a mental journey of numerically-consecutive objects, to each of which you may attach in turn the things (information, lines of math or science) you need to know.

4.  Chunking makes memorization more efficient by decreasing the number of items for recall and increasing the size or importance of each item. Thus credit card numbers are split into groups of four and telephone numbers into several such to make them easier to assimilate.

Returning to the mental journey we have just created, we might recall this piece of text by first bracketing off a mentally-assimilable chunk of highlighted key points from it then attaching (as notes and in one’s head) each chunk in turn to each consecutive stage in the journey.

1 aquarium:  the [theological implication of the self-sufficiency of this world is that it has been given  over to the demonic], which – and this is the [measure of the story’s equivocation and

2 light:  ultimate failure – may or may not be the human irrational].  The place of the [master has been usurped by the servant: Mrs. Grose reports that Quint

3 ceiling:  used to wear the master’s waistcoats; and just after the governess has wished to see the master she glimpses Quint above her (in the position of the master) at the tower window].

4 door:  the Quint-Master relationship resembles that between the [real and the symbolic body of the king in medieval political theory]

And your written and mental notes for recall might be:

In (picture this as a scenario in miniature) or around the 1 aquarium, a man called Theo, while self (-consciously) suffering, gives over pliers to a demon

Under 2 light, a measure near a quiver (or perhaps being stretched out and held by a human hand quivering in fear) of a human rat or rations

Under or perhaps seen from a low angle so that the 3 ceiling is ominously prominent, a servant dissolves into the position of a master while wearing the master’s waistcoats he has always worn, at a tower window

The 4 door is wrenched open, to reveal an enclosure in which rests with a cymbal on top body of a diva in polythene

You may use any memory journey you like, real or imagined, to recall in chunks lists of data such as:

*  lists of mathematical or scientific workings-out, formulae or facts

And for those of you learning languages, you might test your foreign vocabulary against the English name of each stage you are using. 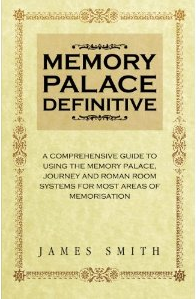 My book Memory Palace Definitive, based upon a most user-friendly number-letter code includes:

5.  The Dominic System, outlined by Dominic O’Brien in his thorough classic How To Develop A Brilliant Memory Week By Week is for me by far the most user-friendly for memorizing the strings of digits we use in mathematical and scientific formulae and calculations computing etc. in part because it uses a standard set of people (rather than objects) and associated action for each pair of digits from 0-99. Thus to recall in the Dominic System:

As the number-letter code Dominic uses overlaps with the one I use in mine and, as it follows the order of the English alphabet, is by far to my mind the most user-friendly, his book would make a most efficient companion to mine in covering most areas of memory improvement. I am hoping in time our overlapping number-letter code will be seen as the standard.

Further persons and actions for use in your Dominic System may also be found in the Files section of the Yahoo Group: World Wide Brain Club (certain practitioners have even extended it to a basic person-action-object formula).

Memorization is also discussed at the following Yahoo Groups: Memory Sports and Art of Memory

I graduated from the University of Warwick in 1994 with an upper second-class BA (Hons) in Film and Literature and am a member of British MENSA.  I am currently writing, with Phil Chambers of Learning Technologies Ltd, a guide to memorizing mathematical and scientific formulae, due for publication by the end of 2012.