How Youth Violence Prevention Videos Are Keeping It Real

Researchers from the University of Pennsylvania, Drexel University and the Philadelphia Collaborative Violence Prevention Center (PCVPC) worked with West Philadelphian residents who are members of the Philadelphia Area Research Community Coalition, to create animated videos promoting a message for youth violence prevention.

The researchers reported their findings in the American Journal of Community Psychology this month and launched the Briana and Damon animated videos on Facebook.

Briana and Damon could be the kids up the block. Briana does well in school and wants to follow in her sister’s footsteps to college. Damon works hard at an after-school job in a local barbershop. They hang out with friends and try to stay out of trouble.

But Briana and Damon have a mission. Voiced by Philadelphia teens, they are a pair of digitally animated street-smart characters with a Facebook page aimed at youth violence prevention. 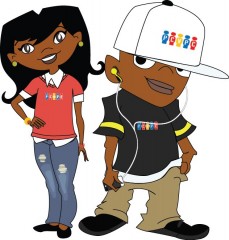 Voiced by Philadelphia teens, Briana and Damon are a pair of digitally animated street-smart characters with a Facebook page aimed at reducing urban youth violence.

The characters and their stories are the product of years of community-based participatory research from the PCVPC, a project funded by the Centers for Disease Control to address violence in Philadelphia.

Researchers often focus on communicating results of studies to others in their field, but getting practical advice to the communities they serve is often more important, according to lead author Dr. Nicole Vaughn, an assistant professor at the Drexel University School of Public Health.

“Our question was: How do we get research back to the community?’” said co-author Dr. Therese S. Richmond, of the University of Pennsylvania School of Nursing.

“Community-based participatory research enables us to develop strategies for violence prevention side-by-side with members of the affected community, but it’s unusual for researchers to disseminate their findings back in the community itself.”

This project brings the research to life. “It’s so important in youth violence prevention to really engage youth in the solution,” Vaughn said.

“We identified strategies, interpreted them in an appealing way, and linked them with evidence-based actions the community can take to decrease violence.”

At that point, the group had the research on youth violence prevention, but needed the medium. “We learned from the community youth that digital animation speaks to this age group and in this community,” said Richmond.

Working with an animator, a focus group with participants between the ages of 10 and 17 reviewed the storyboards and offered feedback. “The kids worked with us on developing the characters, making them look and sound trendy and urban,” said Richmond.

To make the scenes more authentic, the youth participants provided the animator with descriptions of their own neighborhoods and discussed the types of violent acts that they’ve known peers to commit, such as shoplifting and damaging property.

For genuine characterizations in the videos, the youth participants were asked to voice the characters.

In addition, youth were also provided with information from the animator about career paths in the field and ways to continue to be involved in youth violence prevention which Vaughn stated was an example of “co-learning”, a key principle of community based participatory research.

“Learning from the youth about their communities while also giving them the opportunity to learn from a professional in the field of digital design, marketing and animation was a valuable part of this youth violence prevention project,” said Vaughn.

Briana and Damon debuted in January 2011at a PCVPC community symposium. The youth who voiced the characters were celebrated in the symposium. “Having the youth debut the characters and work the community event with over 250 attendees was exciting for them.

The youth had the experience of being a part of the development and delivery of the product to the community and they were well received,” said Vaughn. A public transportation ad was also developed that featured the characters and their youth violence prevention credo.

Each of the five, one-minute videos has a single, distinct message: avoiding peer pressure, working hard, keep calm, finding a role model and deciding against retribution.

In “Barbershop,” a real-life barber voiced a character who gives Damon an after-school job in his shop and appreciates his diligence. In “Role Models,” Briana gives a class presentation on why her sister, a college student, is her role model.

“Engaging youth and adults from the community to develop strategies and tools for sharing research results can improve the meaning, acceptance and translation of the results into community programs and action,” said Richmond. “This further encourages partnership between community members and researchers to study issues important to the community.”

Vaughn said, “Involving the community in sharing research results adds more time to the process, but we think the product is that much richer. The community receives the message well because their voices are reflected in it.”

Niki Gianakaris is Director of Media Relations for Drexel University.