Back in 1997, author Larry Buttram, from Manassas Park, Virginia, was playing a game with his three-year-old niece, Lauren, when she said “Uncle Larry, I think someone should invent a game called, ‘Snatch That Cat’ all about a little girl trying to steal a cat.

Fifteen years later, Buttram turned the idea for ‘Snatch That Cat’ into a children’s book. 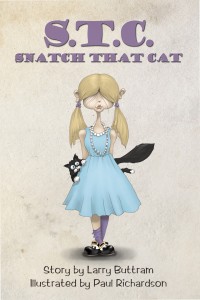 But that mean ole Mrs. Payne won’t sell him to her.

But that’s okay ‘cause Susie’s got a plan.  One way or another she’ll snatch that cat.

But Susie soon discovers that things don’t always turn out as planned, and all of her attempts to kidnap the cat ended up in disaster.

Will Susie ever learn?

Snatch That Cat is a fun children’s book with beautiful illustrations.

A delightfully told story with highly detailed, expressive and exquisite color digital illustrations that will have children squealing with surprise and delight.  Will they ever get a look at what Susie really looks like?

Larry Buttram grew up in Tennessee, and now lives in Manassas Park, Virginia with his wife Bridget. They have two children and four grandchildren.

He has been writing since he was twelve, and has published three mystery novels and a book of short stories. His favorite writing related quote is from Mark Twain. When someone told him they thought he was a great writer, he replied, “Well, I started out to be, but then I ran out of paper.”

Paul Richardson is an American Illustrator living in Japan. He received a Bachelor Degree in Fine Arts from The School of the Art Institute of Chicago in 2003, he worked as a graphic artist that evolved into a visual effects artist for feature film.

He currently works as an English teacher 30 minutes outside of Tokyo, moonlighting as an artist. Snatch That Cat is Paul’s first computer generated children’s book. Although original sketches were made to create the gestures, all the pages were redrawn using a computer to create the lines, colors and text.