Since he was in seventh grade, Louie Alexander has received mail inviting him to apply to costly summer study programs for the gifted, but he long ago stopped asking his parents if he could.

His father is a maintenance man, his mother a lab technician, and they could afford their home out in the rural part of the county only by careful saving. Louie earns his pocket money selling eggs and chickens from the pens that his father built in their backyard.

“Louie doesn’t ask for a lot. He asks for very little,” said his father, Charlton Alexander. “I was like that coming up. I kind of knew what Mommy and Daddy could afford.” 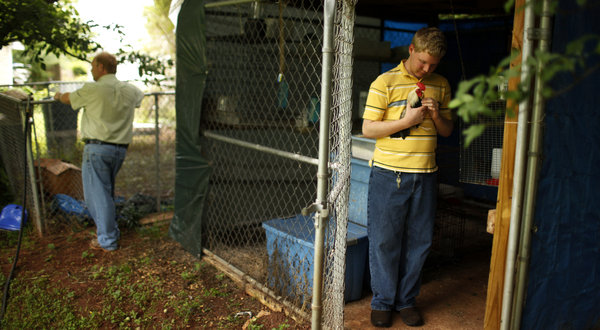 Louie Alexander with a rooster at his home. Louie has been accepted into a selective boarding school in Hartsville, S.C. photo courtesy of Travis Dove, NY Times

It could be that Louie has an old soul, as adults who meet him sense. Or it could be that from early on, he has had to be a realist. Anya Stewart, the guidance counselor at Powdersville High School, a mostly upscale suburban school near Greenville, has to remind herself that he is only 15.

His biology teacher, Maureen Kelly, says Louie has a nice way of correcting her when she gets something wrong.

She buys eggs from him and at the moment has three dozen in the refrigerator.

Natalie Rosenberg, his English teacher, counts maybe three like him in 22 years. He makes connections most do not. When they read “The Crucible,” he brought up the McCarthy era, though students will not study it until American history next year.

Last summer he read a complete set of encyclopedias.

In November, when he asked Ms. Rosenberg to write him a recommendation for the South Carolina Governor’s School for Science & Mathematics, she was surprised. He is so good in English, she assumed he was a humanities kid.

The Governor’s School is something rare: a free public boarding school that offers every resource a teacher or student could want. About 80 percent of the teachers have Ph.D.’s. Students average 1370 on the math and reading sections of their SATs and go on to become engineers, doctors, scientists, lawyers.

In many classes, they do college level research. The school’s director, Murray Brockman, tells parents, “By the time your children leave here, they really understand science in their bones.”

It is probably good Louie did not know the odds. The school sends out 12,000 pieces of mail inviting sophomores from all over the state to apply; about 400 do; 64 are selected each year.

On one wall, he has hung a copy of Thomas Gainsborough’s painting “The Blue Boy.”

He also collects Blue Willow china. Most of it he finds at yard sales. “We try to go to one at least every other week,” Louie said.

He, his mother and his father make a tight little unit. There are two sisters who are older and have moved away. Louie has been separated from his parents for only one week, when he attended a summer camp. He has never flown in an airplane and has traveled only as far as the bordering states.

While he has a sizable group of friends at school (Chad Boltz, another top student who has known him since fifth grade, said, “He’s probably one of the most interesting people I know”), at home Louie is isolated, living out in the country and too young to drive.

On days when he does not have Beta Club, an after-school community service organization, he arrives home by 3:30, gets a snack (“Eats up half the house,” says his father), then heads out back to feed the animals and to clean their pens.

Besides the chickens, there are roosters, rabbits, quail, two homing pigeons and Sparky, the family dog.

There is a hen who leans forward and spreads her wings, for Louie to pick her up.

In his bedroom, he has two fish tanks, one with a turtle, the other with a sucker fish he bought at Walmart.

He loves math and science equally. “Together, they really explain how the world works, math in numbers, science by exploring force and matter and living organisms — that sort of thing.”

In school he gets all A’s, so people assume he is a natural-born brain. “They don’t understand how hard he works,” his father said.