A Triumph Of Courage And Imagination

“A novel as creative, brave, and pitch-perfect as its narrator, an imaginary friend named Budy, who reminds us that bravery comes in the most unlikely forms. It has been a long time since I read a book that has captured me so completely, and has wowed me with its unique vision. You’ve never read a book like this before.”

I AM NOT IMAGINARY… 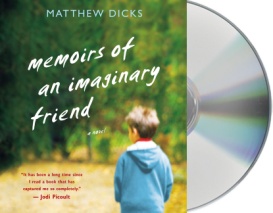 Budo is lucky as imaginary friends go. He’s been alive for more than five years, which is positively ancient in the world of imaginary friends. But Budo thinks constantly of the day when eight-year-old Max Delaney will stop believing in him and Budo will disappear.

Max is different from other children. Some people say he has Asperger’s, but most just say he’s “on the specrtrum.” None of this matters to Budo, who loves Max unconditionally and is charged with protecting him: from the class bully, from awkward situations in the cafeteria, and even in bathroom stalls. But he can’t protect Max from Mrs. Patterson, a teacher who believes that she alone is qualified to care for this young boy. When Mrs. Patterson does the unthinkable, it is up to Budo and a team of imaginary friends to save Max – and Budo must ultimately decide which is more important: Max’s happiness or his own existence.

Memoirs of an Imaginary Friend is a triumph of courage and imagination that touches on the truths of life, love, and friendship. Narrated by the very talented Matthew Brown, Budo’s innocence and naivety are even more keenly depicted, adding an additional layer of depth and nuance to this already rich and innovative story.

MATTHEW DICKS is a writer and elementary school teacher. His articles have been published in the Hartford Courant and he has been a featured author at the Books on the Nightstand retreat. He is the author of two previous novels, Something Missing andUnexpectedly, Milo. Dicks lives in Newington, Connecticut with his wife, Elysha, and their children, Clara and Charles.