“The ultimate goal is to completely prevent the mosquito from spreading the malaria parasite to people.”

Researchers at the Johns Hopkins Malaria Research Institute have genetically modified a bacterium commonly found in the mosquito’s midgut and found that the parasite that causes malaria in people does not survive in mosquitoes carrying the modified bacterium.

The bacterium, Pantoea agglomerans, was modified to secrete proteins toxic to the malaria parasite, but the toxins do not harm the mosquito or humans.

According to a study published byPNAS, the modified bacteria were 98 percent effective in reducing the malaria parasite burden in mosquitoes.

“In the past, we worked to genetically modify the mosquito to resist malaria, but genetic modification of bacteria is a simpler approach,” said Marcelo Jacobs-Lorena, PhD, senior author of the study and a professor with Johns Hopkins Bloomberg School of Public Health. “The ultimate goal is to completely prevent the mosquito from spreading the malaria parasite to people.” 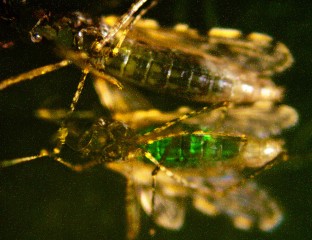 Malaria kills more than 800,000 people worldwide each year. Many are children.

The research was supported by National Institute of Allergy and Infectious Diseases, the Bill & Melinda Gates Foundation, the Johns Hopkins Malaria Research Institute and the Bloomberg Family Foundation.