Free! Front-Row Tickets to the Show Starring “That” Child 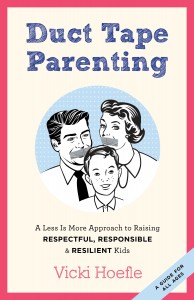 Have you ever been strolling through the grocery store at around 4:00 in the afternoon and witnessed a small three-year-old on the ground throwing a major temper tantrum? You watch as the tantrum escalates and the child throws herself deeper into the performance. And if you continue to watch, a scene plays out in which mom drops to one knee with a calm smile, a pleasant voice, and a reassuring hand as she enters the drama.

I’ll admit, never once, in all the many dramas I’ve witnessed, did I see it end in a satisfactory way, for either the parent or the child. Whether it’s at the grocery store, on the soccer field, outside the schoolroom door, in a doctor’s office, during a visit to relatives, while trying on new shoes, when putting on a heavy winter coat, while slathering on sunscreen, or any of a thousand other scenarios, the tantrum is draining for everyone involved. It’s clear that parents are completely entangled in a mess, emotionally and often physically, by what I call “cheap drama.”

As hosts on my favorite cooking shows like to say, let’s “deconstruct this scenario” and see if we can uncover what’s really going on, find a solution for this temporary upheaval, and explore some long-term strategies that might work to alleviate the problem entirely.

Act One: Engage and Entertain—We Know Where This Is Headed

If you have been here, you know when it happens—a tantrum can come out of the blue or be prompted by a transition or a change of pace, or may happen any time your child has a different opinion than you do. One minute things seem to be moving along nicely, then suddenly you see your child’s attitude and voice shift. You notice that he is getting upset, frustrated, fidgety, mouthy, demanding, disgruntled, agitated. You do your best to cut the impending drama off at the pass, but your usual list of Band-Aid strategies doesn’t seem to be working, and in a split second your child is on the ground or under the chair or running away or whatever it is he does when he finally commits to the performance. And the stage is set.

There is absolutely no reason to try and talk a child out of whatever he is doing (having a temper tantrum, acting shy, whining, whimpering, showing off, acting like a clown, etc.) other than to save yourself the embarrassment or inconvenience the child is causing you or is about to cause you. In fact, whenever parents start to step in and meddle, I ask, Why exactly are you trying to stop a child from throwing a temper tantrum? Tantrums don’t hurt anyone. Nothing bad happens. The tantrum itself is embarrassing but, in effect, it’s something that, without an audience, does not exist! So, what could be over in a matter of minutes usually ends up taking much longer (and causing far more emotional stress) once a parent decides to talk the child out of her behavior, to employ Band-Aid tactics, or to try reasoning with the child. All this attention just makes everything worse!

Test It and Find Out: Walk Away

Here is a sure-fire way to find out if your kids are performing for you or if they truly are melting down into a puddle of incomprehensible mind mush and do, in fact, require your assistance and attention.

At the next sign of a meltdown, simply walk out of the room. If the child follows you, well then, you know the performance is for you. If he yells louder so you can still hear them, it’s for you. If he screams louder, then storms in to get you to react, yes, it’s for you!

However, if the child continues without looking your way, then maybe he really is in distress. This would be a reasonable time to try giving a big hug and a kiss. I know the thought of taking on your lap a kid who just threw, or is in the middle of, a hissy fit puts most parents over the edge. Consider this: the child who needs to be on your lap the most is the one you least want to put there. When children throw temper tantrums, it is the best solution they have to the current problem, and remember that, up until now, it has been working to either keep you busy with them or to get them what they want. If you want your child to change, you must change your thinking, your assumptions, and your actions. So go ahead, try a hug and see what happens. Your child may relax her body, soften into your arms, and let out tears of relief.