Barrier-Free Theatre: The Arts Prepare Students For The Workplace

One of education’s biggest concerns is to prepare students for taking their places in the workforce after they leave school.

Every adult must be able to work in some capacity in order to earn enough money to buy food, shelter, clothing, items of personal hygiene, and a few of the luxuries of life. Businesses are concerned about finding workers who have the appropriate skills to succeed on the job. 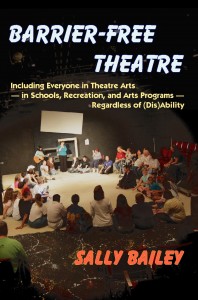 The workplace has changed at a tremendous rate over the last century. There are fewer factory jobs and more jobs in technology and service sectors. Factory jobs required manual skills and the ability to follow directions given by a superior. “Job categories and definitions were often narrowed to improve efficiency.

Jobs were designed to give workers little or no discretion in their movements and workers were not expected to use their intellect or judgment in performing work…a high volume, standardized product and a labor force that was trained to perform small and repetitive tasks [developed as a result]” (Parks 1995, p. 21).

This trend in the workplace is projected to continue into the 21st century.

To get a more specific handle on the seismic change in workforce employment, here are statistics from the U.S. Census Bureau (2001). At the turn of the 20th century approximately 38% of the workforce was involved in farming, 38% was involved in mining, manufacturing, and construction, and 31% was involved in service By the end of the 20th century less than three percent were farmers, 19% were involved in manufacturing, mining, and construction, and 78% were involved in service (U.S. Census Bureau 2001, p. 3). Obviously, the skill set required of workers in the 21st century needs to be different across the board.

These skills are not covered in current school curricula, they have not been prioritized by the “No Child Left Behind” Act, nor are they taught through current traditional “talk and chalk” teaching methods. However, these skills can be achieved through the arts.

Working in the arts, particularly the performing arts, is a great way to teach time management.

Performing artists constantly deal with deadlines. Musical instruments must be practiced every day. Dancers must work out daily to keep their muscles in shape and their technique sharp. Actors in a play must learn lines and movement patterns on time. Sets and costumes must be built and in place by opening night.

When it’s time for the curtain to go up, every facet of the presentation must be ready. You cannot come out before the show begins and say to the audi­ence, “Sorry, folks, we only know the lines for Act One, so we’ll only do part of the play,” or “We didn’t finish all the costumes, so just imagine the princess is wearing a beautiful ball gown instead of blue jeans.”

Management of resources is another skill an artist uses every day. Because designers and technicians have to work within a budget to create sets, costumes, and props, the art of stagecraft has been developed to include many clever tricks that make the audience believe they are seeing something that really is not there.

The performing arts, in particular, stress interpersonal-interaction skills. An actor, musician, or dancer must learn to work with others toward the creation of a common goal: the performance. Drama, which often involves the re-creation of real-life situations and relationships, is especially useful for developing the ability to work with and understand others. The ability to share and to negotiate solutions to problems is crucial in the workplace and in the rehearsal hall.

In addition, the more clearly a person can communicate with words and actions, the less frequently others will misunderstand her — and the more often she will be able to understand the communication of others.

The process of creating art involves flexibility, spontaneity, and the ability to adapt to change. Each line that an artist puts on a piece of paper requires assessment and adjustment to the overall creative plan. Each moment on stage must be brought to life anew by the performer each time it is performed.

Mishaps or mistakes in a performance must be dealt with by the actor, dancer, or musician without stopping the show or letting the audience know that anything went awry. If you forget your line or dance step, you improvise something that makes sense and does not throw off the other performers until you remember the next thing you are supposed to do or say. If they are doing their job, they’ll improvise something in return that will help get you back on track!

Improvisation in life and in art is important; inflexibility and rigidity will kill the ability to be expressive and creative in any art form, interpersonal relationship, or problem-solving situation. Improvisational acting games train students to respond quickly and appropriately to incoming verbal and nonverbal messages from others, a skill that any salesperson, teacher, or personnel manager needs to have. Improvisation also teaches approaching life and work in a flexible, playful manner rather than in a stressful, tense one.

Connections and comparisons are made within the artist between the new information and the old. A new response is generated and the artist must formulate a way to express that new idea. Here we have practice in information assessment and synthesis, two of the thinking skills mentioned above as necessary for workers to develop.

In addition to all of this, the arts teach the rewards of completion.

A student who works hard and finishes her art project, whether it is a painting or a performance, has a finished product in the end — something she has made, can be proud of, and which says something about her.

The feeling of accomplishment that comes with completion is one that cannot be understood until it is experienced. Once it is experienced, the student learns that the effort and sacrifice involved in working on a project is worth it. Job satisfaction, self-discipline, and taking pride in your work are no longer just abstract ideas; they become meaningful in personal terms.

The final outcome of an experience in the arts is the development of self-esteem. When a student finishes a project, overcoming all the challenges, obstacles, and frustrations along the way, she starts to feel good about herself. Connections of new knowledge are made inside.

Connections of recognition and appreciation are made between herself and others. She sees that she can contribute something which others in the community value. She can feel personal growth and sense her own potential. This creates the motivation to keep on going and keep on growing.

In her drama therapy practice she has worked extensively with people with disabilities and people recovering from substance abuse.

She is the author of Wings to Fly: Bringing Theatre Arts to Students with Special Needs, and Dreams to Sign. She is a past president of the National Association for Drama Therapy and recipient of NADT’s 2006 Gertrud Schattner Award, given for distinguished contributions to the field of drama therapy in education, publication, practice, and service.