Have Another Slice: The Surprising Health Benefits Of Pizza 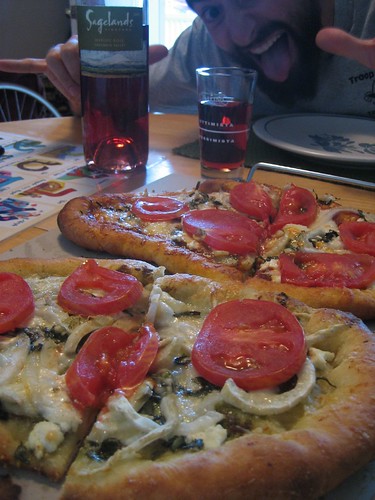 Pizza gets a bad rap. The dish that can claim early origins dating to the 1st century BC is often lumped in with fast foods such as hamburgers and fries as a treat that should be consumed in moderation. In reality, pizza is healthier than you might think. Pizza can actually be a highly nutritional meal that covers most of your basic food groups and meets most of your nutrition requirements. Forget protein bars and stir-fried mung bean sprouts. Let’s take another look at pizza.

It Starts with the Sauce

Sauce is at the heart of just about any pizza. Of course, a main ingredient of sauce is tomatoes, which contain antioxidants such as lycopene. This particular antioxidant has been shown to reduce the risk of certain types of cancer. Some studies even suggest that eating pizza at least once a week may reduce the chances of getting stomach, colon, mouth, prostate, esophageal, and lung cancer. The cooking process also boosts the goodness found in the sauce since that brings out more of the antioxidants in the tomatoes. It’s not just the tomatoes in the sauce, however, that are good for you:

The Data to Back It Up

It should come as no surprise that a study on pizza was done in Italy, of all places. About 8,000 people participated in the Italian study on the benefits of pizza. The study showed a reduction in colon and mouth cancer among individuals who consumed pizza at least once a week. Three studies by the Istituto di Ricerche Farmacologiche in Milan conducted in 2001, 2003, and 2004 echo similar findings in other studies on the health benefits of pizza. The 2001 study indicates that pizza does not contribute to coronary artery disease. The 2003 study suggests that pizza may prevent or help reduce the risk of developing certain cancers. The 2004 study suggests that eating pizza on a regular basis may reduce the chances of a heart attack.

You can get most of your major food groups covered in one pizza. The cheese is a source of calcium. The sauce is a source of antioxidants, as is the dough. If you add vegetables to your pizza, you can cross off a few more food groups. Meat gives you protein, with chicken being the healthiest choice. If you add pineapples to your pizza, you can cross fruit off your list too. Don’t forget that the tomatoes in the sauce are technically a fruit!

It’s hard to believe that something as inherently delicious as pizza can be healthy. It goes against everything that’s been instilled in you since childhood. Things that are good for you aren’t supposed to taste good. Fortunately, there is plenty of research to back up the assertion that pizza can be a perfectly healthy meal and a pretty good source for your nutritional needs. The next time you feel the urge for a pizza, you can enjoy it without the guilt.

Kathy Knight writes for delivery.com, a site she recommends for finding the best delivery options at Delivery.com Jersey City.