Video Games And Your Kids: How Parents Stay In Control 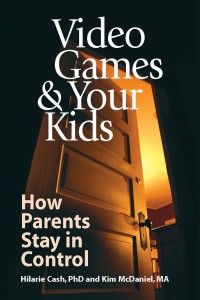 It is now estimated that 90 percent of our youth are playing video games.

Based on research and clinical experience, this book explains what gaming addiction is, how much gaming is too much, and the effects gaming has on the body and brain.

The authors give gaming advice on each stage of life; birth-2 years, ages 2-6, elementary school years, adolescence, and adult children still living at home. Where there is a problem, the authors provide parents with tools that will help them successfully set limits for their children.

It’s two in the morning. Jason is full of nervous anticipation of the challenge and fun that lie just ahead. He’s not tired, even though he has slept only three hours in the last two days. He already knows he won’t get up for school when 6:15rolls around.

He might not sleep at all. It all depends on the success of his “mission.” His guild[1] is camped out where they know a boss[2] is going to show up. They hope it will drop some rare armor when they defeat it that, they have agreed, will become the property of Jason. With the power this armor bestows, he will be able to protect other members as they level up[3]. He’ll attain serious prestige in this game fairly soon…if all goes as hoped.

School holds no interest for Jason. It’s boring. And his social life there sucks, too. He hasn’t found anyone who likes to game like he does, and the games other kids are into are as boring as they are. That is not how he feels about his on-line friends. Time spent with them is never boring. They have important things to do in the game. They love each other; they would lay down their lives for each other.

There is a girl in the guild that he really likes, too. They’ve chatted privately quite a bit. She is two years older and that is fine with him. If he can get some money together, he’ll go visit her inCalifornia. There is definitely romance between them. Jason is in love; he’s sure she is, too. He has asked his parents to send him there for a visit and they have refused. He hates them for their stinginess and lack of understanding. He knows he’ll flunk out of school soon and is glad. He would love to see how upset his parents will be, especially his dad. And it will be a relief to get it over with. He’s pretty sure his parents won’t kick him out of the home; they will be too worried about their little boy. That will leave him free to play as he likes and not be hassled by his parents beyond the occasional lecture, yelling, and tears that he knows will come, then pass.

Upstairs, Jason’s mother awakens and heads toward the bathroom. She pauses by the stairs and listens. She can hear her son talking into his headset, the sound muffled by distance and a closed bedroom door. A wave of despair and depression sweeps over her. What is going to happen to her son? Can her marriage survive the strain? Her husband blames her for being too lenient with the boy; she blames him for being too harsh. He’s angry all the time and never misses an opportunity to throw Jason a verbal barb. It must be devastating to Jason’s self-esteem. How can they protect their young daughter from the toxic atmosphere that now pervades the house? She has run out of ideas. It feels to her as if she’s watching a train wreck that is happening in slow motion and that she is powerless to stop.

Jason’s father wakes up, his body missing the warmth of his wife. He knows immediately that she is listening to their son gaming and grows angry. It will be a while before he’s able to sleep again, and this makes him angrier. As he lies in the dark waiting for his wife to return, he thinks about the mess they are all in. He can see so plainly that his son is on a path to nowhere, that he will never be successful in the adult world if he doesn’t change course. His wife sees it, too, but she is weak and resists taking strong action with the boy. Jason needs to be kicked out of the house if he fails school, which seems inevitable. Tough love they call it. He believes in it, but his wife does not. She wants help for Jason; he wants to give Jason a good swift kick in the pants.

He bridles at the notion that he is somehow to blame for the mess Jason’s in. It’s a father’s job to be the disciplinarian and instill values of hard work. It’s not his job to be a nurturer. That’s for women who are good at it. Compared to his own father, he’s a saint. He has never hit the boy, only yelled at him when he needed it. He does not understand why his son seems to hate him so much. He thinks it must be anger over their recent move, done for his career, combined with the negative influences of that Internet world his son now inhabits. His son is addicted, no doubt about it. The one time they tried to remove the computer from Jason’s room he threatened suicide. They believed him. He looked completely crazy, so they gave back the computer and breathed a sigh of relief when Jason returned to his normal, withdrawn demeanor; happy when gaming, angry at any interference from parents….