Americans will scrape millions of pounds of pulp from pumpkins throughout the Halloween season and Roto-Rooter plumbers from Death Valley, California, to Salem, Massachusetts, will remove gobs of it from clogged drains.

Local Roto-Rooter plumbers have become as common a Halloween visitor as little vampires or ghosts thanks to sticky pumpkin pulp and seeds.

Plumbers know that frantic homeowners will soon be complaining about pulp-clogged garbage disposals and stopped up kitchen sink drains in the two weeks leading up to Halloween. 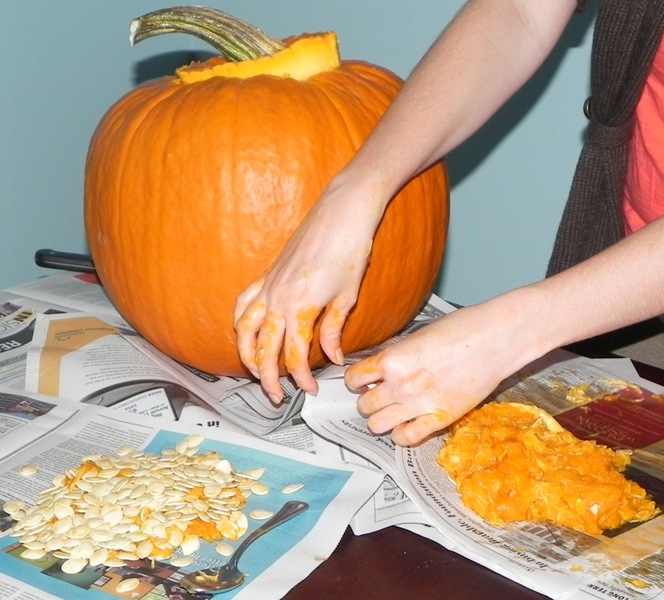 Roto-Rooter, America’s largest provider of plumbing repair and drain cleaning services reminds jack-o’-lantern carvers that pumpkin pulp should never be put down drains or into garbage disposals. The slimy gunk is ideal for clogging sink drains.

“It’s stringy and sticky and when it dries and hardens it will choke-off drainpipes and garbage disposals creating all sorts of havoc.” said Larry Rothman, plumbing director for Cincinnati-based Roto-Rooter Plumbing and Drain Service.

“For the past few years we’ve spread the word that carving pumpkins in the sink is a very bad idea,” he added. “People think that when they shove the pulp down kitchen sink drain that it’s gone but in a little while the sink usually stops draining altogether.”

Rothman says it’s also worth noting that Roto-Rooter gets several calls about pumpkin guts flushed down the toilet, usually with similar clog-causing results. “The toilet is not a better option. It just means the clog forms a little further down the pipe.”

To prevent Halloween drain disasters, Roto-Rooter suggests carving pumpkins on a bed of newspaper. Then carvers should wrap up the mess and throw all pumpkin-related materials into the garbage can or into a compost pile.

The seeds can be separated and roasted for a tasty treat or they can be air-dried and planted in the spring after the last frost to grow next year’s Halloween pumpkins.

Roto-Rooter, a wholly owned subsidiary of Chemed Corporation, was established in 1935 and is the largest provider of plumbing and drain cleaning services in North America. Roto-Rooter operates businesses in more than 111 company-owned territories and more than 500 independent franchise territories, serving 91 percent of the U.S. population and 44 percent of Canada.