Of course, nothing could be further from the truth. The reason that people think there’s only one way to study is because the way that we process and absorb information is a very personal thing, and many of us do find that certain methods work really well for us while others don’t seem to help at all. Here’s the thing, though: just because a method works for your friend, that doesn’t mean it’s the best way for you to be studying.

There are lots of different ways to study successfully; the trick is just to find out which one works best for you. Want to try a few out and see how you do? Here are some of the best tips and tricks for you to test.

Break it up. Experts say that we learn better when we keep our study sessions shorter. Specifically, we’re supposed to go at it for anywhere from 20–50 minutes at a time, then give ourselves a 5–10 minute break so that we can refresh and our brains can process all the new information we’ve been filling them with.

Remove distractions. While some people do just fine learning in distracting environments, many of us need peace and quiet to truly focus and absorb what we’re trying to learn. It used to be that students could simply close the door to their room and block out the outside world, but today distractions have snaked their tendrils closer in the form of TVs, computers, video games, smart phones, and other ways of connecting to the world and having fun. When you need to study, shut everything off so you won’t get tempted.

Reward yourself. Need a carrot (figuratively, of course) to make yourself study? A number of people have found that it works wonders to let go and play a bit as a reward for successfully getting through their studies. Just be careful not to reward yourself during your break period or you might find it too difficult to get back to work.

Get up early. It’s not for everyone but certain people swear by waking up early and studying. They say that their brains are more aware and alert, and that they have more energy and focus to help them power through doing something they don’t want to do. Of course, the opposite is true for other people, which is why it’s so important to find the method that engages your brain the best.

Use music. Some kinds of music are better than others and it doesn’t work for everyone, but turning on music when you study can be quite helpful in getting you to concentrate. Studies have shown that certain forms of classical music can increase production in workforces but other kinds of music may work, too. It just depends on you.

Repetition. Though it’s not necessarily as helpful in letting you find the themes in the work of William Trevor, repetition can be especially useful for subjects that involve lots of different facts, figures, and memorization. Repeating something until you can parrot it back might not seem like “real” learning to some people but if you think about it, that’s how pretty much all learning occurs. We do something over and over until it becomes second nature.

Highlight, underline, and rewrite. All of these are grouped together because they’re really part of the same process—physically engaging you in the learning so that it will increase the likelihood that you’ll remember important details. As a bonus, highlighting and underlining should also serve to draw your attention to those parts of the text when you’re going back over them again as yet another reminder.

Aileen Pablo is part of the team behind Open Colleges  one of Australia’s leading providers of Open Learning. When not working, Aileen blogs about education and career.She is often invited as a speaker in Personality Development Seminars. 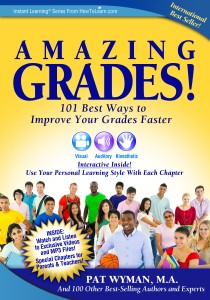