Rep. Dan Truitt (R-Chester) was joined in the Capitol by concerned Pennsylvania students and teachers who urged the Legislature to pass Truitt’s bill, which was introduced to strengthen Pennsylvania’s anti-bullying law. 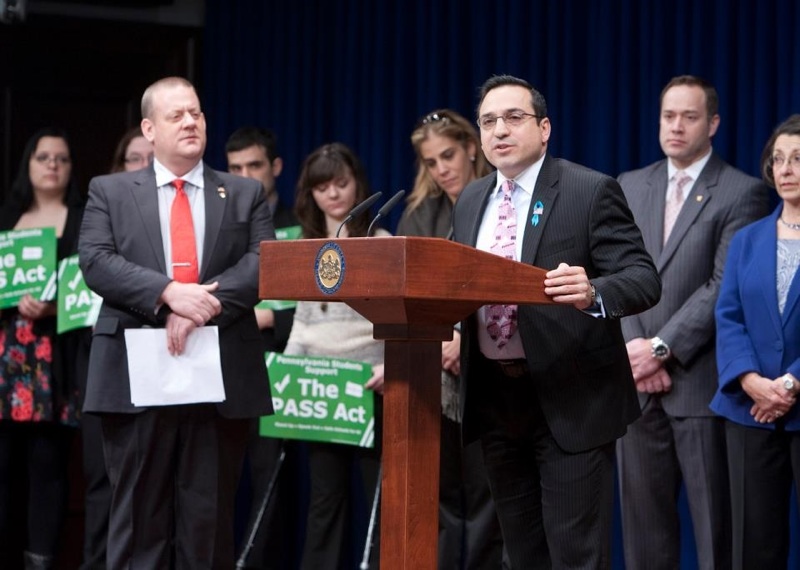 Dr. Claudio V. Cerullo (center at podium), the founder and president of Teach Anti-Bullying, speaking on behalf of the Pennsylvania Safe Schools Act (PASS) with State Rep. Dan Truitt (at left) in the Capitol Media Center in Harrisburg, PA

Specifically, his legislation would require clearer definitions, follow-up requirements, and an on-line system for recording, tracking and reporting incidents of bullying in PA schools. The system would enforce deadlines for investigations and would generate reports and send email updates to school and state officials.

“Bullying should never be considered a normal part of childhood,” Truitt said. “Bullies rob their victims of some of the joys of childhood. Years later, the bullies look back and recall ‘youthful indiscretions’ with a little laugh and maybe a little remorse. Their victims look back with pain, sadness, and sometimes a bit of anger.”

The PASS Act puts in place the most essential protections in school for students, educators and administrators. It also requires such acts be reported to the state.

Truitt introduced the PASS Act in 2012, but the term ended before the House could take action.

“Pennsylvania students are distressed every day in our schools without the effective policies to make it better,” said Jason Goodman, executive director of Pennsylvania Student Equality Coalition. “Too many young people in Pennsylvania have even chosen to end their lives to escape this type of violence. It is critical that the Pennsylvania General Assembly review and adopt the PASS Act at full speed ahead. With its central components intact, this legislation will change Pennsylvania’s record on safe schools and provide critical protection for all students.”

HowToLearn.com‘s partner, TeachAntiBullying founder and president, Dr. Claudio V. Cerullo said “The PASS Act is critical in that it fosters continuing education in a specific area of need which will give rise to a better understanding of the current epidemic, which is bullying.”  “Secondly, teachers will have professional educational development, which is critical to the knowledge base of the topic of bullying.”

“Although bullying exists, more than 85 percent of the incidents go unreported,” said Barbara Whitman, customer relations of Bullying Prevention Training Masters Inc. “Students are pleading for the teachers to observe and get involved. Why aren’t they? The PASS Act is an important step forward because it ensures incidents of bullying are reported and investigated in a timely manner.”

Pennsylvania currently is ranked by the United States Department of Education as having one of the most insufficient safe schools laws in the nation. The Commonwealth lacks seven of the 16 identified central components of state level anti-bullying policies identified by the U.S. Department of Education. All of Pennsylvania’s neighboring states have more effective safe schools laws.

“Children learn more when they enjoy school,” Truitt said. “The victims of bullying can’t enjoy school. If this legislation can help children with certain attributes to get more joy out of childhood, or if it helps to produce a generation of adults who are better at treating all others with respect, it will be a very good thing for all.”

Pat Wyman, sits on the board of TeachAntiBullying.com

Additional information about Teach Anti-Bullying is available at TeachAntiBullying.com.