Like U.S. ambassadors to overseas countries are tasked to keep the peace, more than three dozen Tehachapi High School students have been selected to build bridges between different social groups on campus.

The in-depth anti-bullying training was the third in a series of events that kicked off the Safe School Ambassadors’ “Waking up Courage” campaign, which began on Monday in Tehachapi with an all-school assembly, staff development meeting and a parent community gathering that evening.

This anti-bullying was funded in part by a $74,000 grant from the State Farm Youth Advisory Board under the auspices of the Kern County Superintendent of Schools and developed by Community Matters in California, the anti-mistreatment program provides a unique approach to making school campuses more inviting for all students.

Up until now, students had only two options when witnessing classmates being mistreated — do nothing or say nothing, or become a “snitch.”

But not anymore, as student ambassadors learned they have other options to intervene with friends and classmates when they see teasing, bullying or any behavior that involves their peers mistreating each other.

Students were first taught the four basic parts of the SAA program: notice, think, act and follow through. Then the intervention steps: balancing, support, reasoning, distracting, directing and if needed — getting help.

Read more articles about Anti-Bullying and visit TeachAntiBullying.com for more information on preventing and stopping bullying. 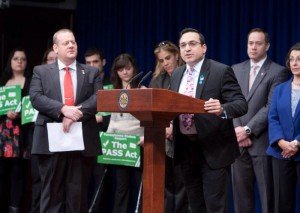